Despite a first-round loss to powerhouse Wilmington, Lisle's season was one to be proud of 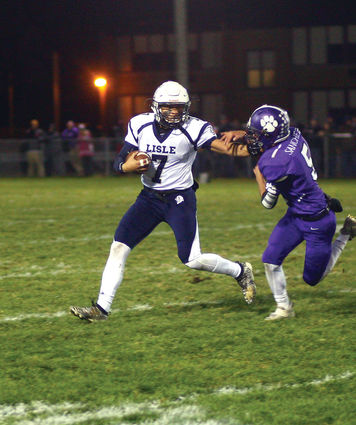 Aidan Lombardo and Lisle advanced to the playoffs in back-to-back seasons for first time since 13 seasons.

From 2001-06, Lisle advanced to the IHSA football playoffs every season for six years in a row.

From that point on, the Lions advanced three times heading into this season, but never two years in a row.

"It was a great season," said Lisle coach Paul Parpet. "For the first time since 2006 Lisle has been to the playoffs back-to-back seasons. We played our butts off."

Lisle lost its first-round playoff game 24-12 to Interstate-8 opponent Wilmington without Brett Weber and Mike Walker – both two-way players out with injuries.

"It was a dogfight. I am proud of our boys and how we competed," Parpet said. "We were short players and I think our defense played well and we did some things on offense, but once (Wilmington) gets the ball, it is tough to get it away from them. If we make some tackles, it is a different game."

Wilmington opened up a 14-0 lead before senior quarterback Aidan Lombardo found a well-covered Demetrius King Jr., who made a difficult catch in the right corner of the end zone. A blocked PAT made the score 14-6.

Lisle got the ball to start the second half and less than three minutes into the third quarter, Lombardo ripped off a 44-yard touchdown run. A failed two-point attempt left the score at 14-12.

From there, Wilmington added a touchdown and a field goal to close the scoring.

On the night, Lombardo carried the ball 18 times for 97 yards and one score. Wilmington doubled up Lisle in total plays, 52-26.

"The whole state, everyone in Class 3A football, knows what Wilmington does. They have been doing it for the last 26 years," Lombardo said. "We knew we weren't just going to go out there and give it to them and I am proud of everyone and how we fought. We didn't want the season to end the way it did. Last time we played they, they won and we wanted to show them that we are not just here to play – we want to win. In the first half, we saw some signs, but we just had some breakdowns in the second half." 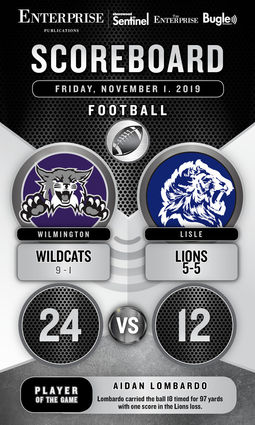 Lisle loses tough game to Wilmington in the first round of playoffs.

While they did not want the season to come to an end, Lombardo knows how successful the season was.

"This has been my favorite season so far," he said. "Last year we had a lot of success, but a lot of the starters right now weren't really involved, so this was a good season to go out, especially the seniors."