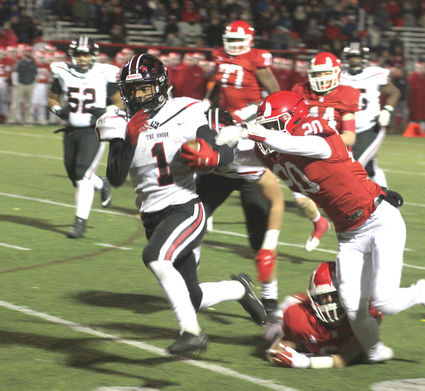 Antonio King breaks away from defender in route to blowout win over Hinsdale Central.

In what was a complete dominant performance, Bolingbrook rolled past Hinsdale Central 42-13.

The Raiders (7-3, 3-3), who have been bounced out of the first round for the last four years, were determined to not let it happen for the fifth consecutive year.

"We've been knocked out the last four years so it feels good to make it to the second round," said coach John Ivlow. "We're very healthy at this point in the season and that's what has been our Achilles heal the last few years having key guys out so that's been a huge difference."

With a Red Devil fumble that was picked up by senior linebacker D'Mauryon Hunter, the Raiders were back in position to score.

An 11-yard rushing touchdown by junior running back Justin Lynch (17 carries, 141 yards) extended the Raiders early lead to 14-0 with 4:50 left in the game.

"Great blocking to my [offensive line] tonight," Lynch said. "They did a wonderful job blocking for me all night."

With a 14-0 lead that went into the second quarter, Bolingbrook kept the offensive momentum going.

A seven-yard touchdown run by Lynch put the Raiders up by a score of 21-0 with 8:21 left in the first half.

The Red Devils answered with their first score of the game with a 35-yard touchdown pass from Junior quarterback Mike Brescia to senior wide receiver Mitch Anderson that made the score 21-6 with 1:34 remaining in the half.

Apparently, a 15-point lead at the half was just not enough for the Raiders.

On what continued to be a dominant first half for Lynch, nothing changed in the final minute.

A 62-yard burst set up a five-yard touchdown run by Lynch that put the Raiders lead to 28-6 at halftime. 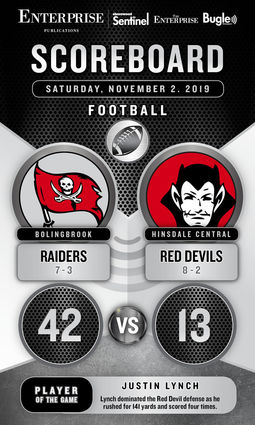 Bolingbrook cruises past Hinsdale Central in the first round of the 8A playoffs.

"Lynch really stepped up tonight," Ivlow said. "Again, he got his chance because of injuries and he did a hell of a job."

In the second half, not much changed.

A 20-yard evasive touchdown run by senior wide receiver Antonio King put the Raiders up 35-6 with 6:08 left in the third, making the game out of reach for the Red Devils.

To capitalize on his night, a two-yard rushing touchdown by Lynch culminated on what was a four-touchdown evening by the junior.

"It's surreal to me," Lynch said. "We came out after that last game we lost and we had the mentality that we were going to get this first round win."

The No.21 Raiders will host the No.5 Oswego Panthers in the second round of the Class 8A playoffs at 6 p.m. Saturday at Bolingbrook High School.