By Kevin Barlow
The Bloomington Pantagraph 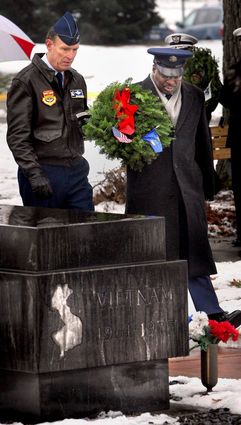 On Monday, monuments and memorials dedicated to those who served in the armed forces in Illinois will serve as the background for events to recognize Veterans Day, a federal holiday observed annually on Nov. 11 to honor military veterans.

The monuments, which range from big to small and old to new, were built with the purpose of serving as permanent markers. The biggest include stadiums, like Chicago's Soldier Field or Memorial Stadium on the campus of the University of Illinois at Urbana-Champaign. The smallest includes the recently dedicated memorial in unincorporated Illinois City in Rock Island County. The 500 bricks are engraved with veterans' names and unit information; a 5-foot marble slab is engraved with emblems of all the branch services.

"Memorials are a link to not just past wars and to those who served; they are a daily reminder to our future generations that there is a price that has been paid by past generations of common men and women, some who paid the ultimate sacrifice that our freedom is not free," said Joe Schaler, a veteran's advocate and Vietnam War veteran from Lincoln.

Dedicated in 1924, Memorial Stadium honors the 189 Illini who died in World War I, each memorialized on one of the limestone columns that support the stadium's upper stands. The stadium originally honored those who gave their lives in the "war to end all wars," but its designers recognized the fragility of world peace and the likelihood of sacrifice by future generations.

In 2002, the university extended the stadium's original dedication to honor all members of the Illinois family who served in the U.S. Armed Forces.

Soldier Field, along Lake Shore Drive in Chicago, opened in 1924 and is the home field of the Chicago Bears. Each Veterans Day, a ceremony is held in front of the statue of Doughboy, an informal term for a member of the infantry, especially members of the American Expeditionary Forces in World War I. Soldier Field was named at the request of Gold Star Mothers to honor men lost in World War I. Nearby benches for moments of reflection contain notable quotations about service to country and actual Medals of Honor cast into the backrests.

"The only time I go to Soldier Field is for Veterans Day," said Bill Houser of Chicago, a Korean Conflict veteran. "It is a moving ceremony and I think that so many people forget the original purpose of this stadium, and that is to honor our soldiers."

The Illinois Department of Veterans Affairs says it is nearly impossible to know the number of veterans' memorials and monuments in Illinois. Veterans Memorial Hall and Museum in Rockford was one of the first of its kind in Illinois to be dedicated to veterans of all wars. The 26th U.S. president, Theodore Roosevelt, was guest speaker at the dedication ceremonies on June 3, 1903.

The hall and museum still stand as a living memorial to veterans from all wars. Its mission remains as a way to preserve, display, and share the artifacts of Rockford and Winnebago County veterans who served in branches of the military.

"There is so much history in there and it is beautiful and so important to our state's history," said Air Force veteran Tom Bursell of Rockford. "There are so many stories there."

The Sept. 11, 2001, terror attacks spurred several memorials dedicated to those lost on that day and the War on Terror that followed. Naperville erected one of the first memorials in the country to honor those who were killed. Located on the south bank of the DuPage River, the memorial includes rubble from the Pentagon, granite from the ground in Pennyslvania where Flight 93 crashed, and a beam from the World Trade Center in New York.

Another spot also of interest to veterans and Illinois citizens is Lincoln's Tomb at 1500 Monument Ave., Springfield. Dedicated in 1874, it is the final resting place of Abraham Lincoln, his wife Mary Todd, and three of their four sons, Edward, William and Thomas.

More than 987,000 Illinois men and women who served in World War II and the 22,000 who gave their lives, are honored at the World War II Memorial at IDNR-One Natural Resources Way, Springfield. Its focal point is a white 22-ton concrete world globe flanked on two sides by black granite walls. Stainless steel buttons on the globe identify major battles, and quotations from military leaders and presidents Franklin D. Roosevelt and Harry S. Truman are engraved on the walls.

The Illinois Vietnam Veterans Memorial, dedicated in May 1988 in Oak Ridge Cemetery in Springfield, honors Illinoisans killed or listed as missing in action during the Vietnam War. "It's the second most visited cemetery in the country," Schaler said.

The memorial incorporates five black granite walls upon which are inscribed the 2,970 names of Illinoisans who died or are still missing. The five black granite walls form interior courtyards, one for each of the five branches of service. Each branch of service is designated by its insignia, which is etched on inner 15-foot gray granite walls. Inscribed on walls are the names of those listed as missing in action or as prisoners of war, as well as the names of the highest decorated veterans in each branch of service.

"Amazing," said Gene Talley, a Vietnam War veteran from Springfield. "It is inspirational and beautiful at the same time. I always have mixed emotions when I see it. But, one feeling remains. That is pride."

"We formed the Veterans Memorial Foundation to create the 'Heart of War Plaza,'" he added. "Currently, we have the World War II, Korean, Vietnam and Purple Heart memorials and last month we relocated the World War I memorial into the plaza in recognition of the 100th anniversary of the end of World War I. Thousands of visitors tour these memorials each year, most of whom are school field trips."

All are being wired to be interactive for self-tours and another 20 proposed memorials are on the drawing board, said Schaler, who serves as the foundation's chairman.

"This will become the premier memorial plaza in the country," he said.

Residents in Fayette County in southern Illinois have the Veterans Educational Museum in Vandalia, which holds more than 800 military items donated by Fayette County veterans. Display cases include artifacts from wars and conflicts from World War I through Desert Storm.

Located on the grounds you will find the Veterans Memorial wall display. Dedicated in 2003, it lists the names of over 7,000 Fayette County veterans.