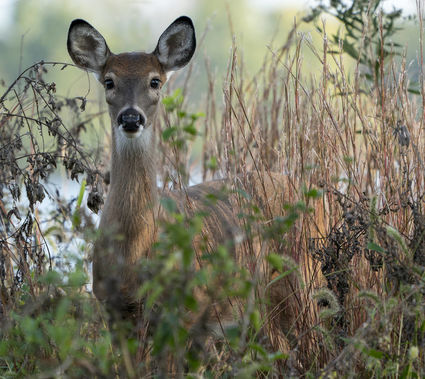 Rink said he arrived early for a Joliet Junior College nature photography class field trip when he spied two young deer in the bushes at Rock Run Rookery in Joliet. "I've always loved animals and I'm always very careful. I let them come to me. Often, it's more of a waiting game."

Honorable mentions for October were awarded to: Eileen Capodice of Minooka for a photo of a snowy white egret and its reflection in dark water at McKinley Woods in Channahon; Jim Saldana of Joliet for a photo of a stand of trees bathed in golden light at Hammel Woods in Shorewood; Jennifer Gabrenya of Romeoville for her photo of a pink-and-purple sunset at Lake Renwick Preserve in Plainfield; Mark Hanna of Romeoville for three pelicans roosting in a row at Rock Run Rookery; and Vicki Russell of Dyer, Ind., for a picturesque photo of colorful fall foliage reflected in water at Theodore Marsh in Crest Hill.

All of the contest's photo entries can be viewed on the District's Flickr page, Flickr.com/WillCoForests

Rink’s photo will compete with eight other monthly finalists for overall honors once the contest concludes on Dec. 31. The top three finishers will be determined by voting at Facebook.com/WillCoForests. The overall winners will receive MasterCard gift cards worth $500 for first place, $250 for second place and $150 for third place. Monthly winners receive $75 gift cards.

The photo contest is sponsored by The Nature Foundation of Will County. For more information on the contest, including the rules and a submission link, visit ReconnectWithNature.org.