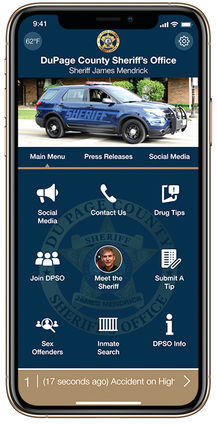 In 2019, it's hard to find someone not glued to his or her phone. In some cases it's good, and some are not so good. What the DuPage County Sheriff's Office is now doing, is good.

The DuPage County Sheriff's Office has released a new smartphone application that can be downloaded for safety.

"I think it fills a void," said DuPage County Sherriff James Mendrick. "The biggest problem and the challenge that public safety has is people don't really know what we do, and I'm very proud of what we've been doing."

Well, now, DuPage County will have a better idea.

Not only will this new smartphone application be able to allow the office to reach out to citizens during an emergency, but it will also allow anyone with a smartphone to report anonymous crime tips directly to the office.

To add onto that, the smartphone application will also allow those to feel more safe and understand his or her surroundings by identifying sex offenders. This smartphone application allows those to search for registered sex offenders in the area, view current DuPage County Jail inmates, see new job opportunities throughout the office and connect to various social media platforms.

"It's pretty staggering numbers out there seeing that something like 84 percent of people have a smartphone," Mendrick said. "We chose this vessel to deliver what we're doing, this is a custom made app that we got and we're very excited about it."

This application that was released on Oct. 21 is far from being finalized, as Mendrick said it is a work in progress with new abilities coming to the application.

It was purchased by the office from TheSheriffApp.com, where the office explained the services they wanted to be utilized on the application.

What's coming eventually is an inmate search notification, and a victim notification where the office will notify victims when someone who did the crime is released from jail.

"A nice part about this app is it's also upgradeable," Mendrick said. "With more issues that come to our attention from the community, we can act on that through this app which will benefit those with the app."

To add to more technology besides the application, Mendrick said the more ways to showcase what's going on to the community the better.

Mendrick added that a drone will be in the works eventually, with the purpose of it is if a crash happens, that can be automatically uploaded to the application for instant notice. 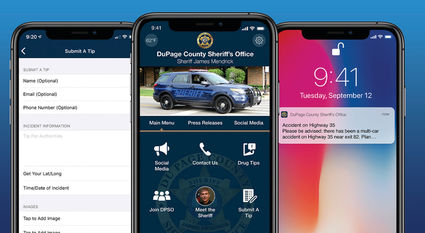 "The drone will work in ways such as if there's a crash and people wouldn't necessarily see it before, if they check the app then they can see to avoid that area," Mendrick said. "

To download the DuPage County Sheriff's Office application, it is available for free in the App Store and Google Play by searching "DuPage IL Sheriff".

"What I consider the greatest value of this app is that it opens a pure dialogue with citizens," Mendrick said. "My job as a Law Enforcement official is to try and predict the needs of society, but if I can now have a vessel where I can actually know through communication what the greatest needs are, I believe it's the greatest tool that we can provide."