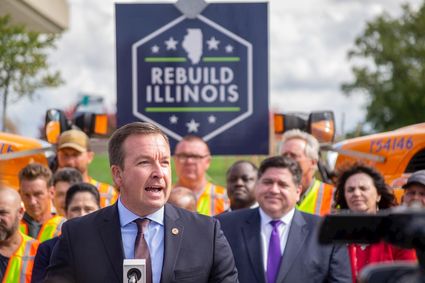 If Sen. Andy Manar has his way, people in Illinois would move their clocks ahead one hour this coming spring, then never have to change them again.

Manar, D-Bunker Hill, said in a Twitter post Wednesday he plans to push for passage of Senate Bill 533 when lawmakers return next week for the final three days of the fall veto session. That bill calls for setting clocks ahead one hour to Daylight Saving Time on Sunday, March 8, 2020, then leaving the state on Central Daylight Time permanently.

"So we're going to give this a whirl next week in the #ILSenate. SB 533 would end the arbitrary time change & IL would join other states," Manar tweeted.

Manar said the idea for the bill came to him from a Carlinville High School student. And in his tweet, he linked to a recent Newsweek article that cited research that suggests the twice-yearly clock changes in most of the United States might have detrimental health impacts.

Daylight Saving Time was used sporadically during the first half of the 20th century. The idea was to move one hour of daylight from morning to evening in order to give people more daylight time after work or school.

But it came back in 1966 when Congress passed the Uniform Time Act, which included provisions for using Daylight Saving Time half the year, in order to standardize time across the country and avoid confusion in the transportation and broadcasting industries.

Under the current schedule, clocks are moved forward one hour, to Daylight Saving Time, at 2 a.m. on the second Sunday in March, then moved back one hour, to Standard Time, the first Sunday in November.

According to the U.S. Department of Transportation, Daylight Saving Time reduces energy consumption because it reduces the need for household lighting and appliances. The agency also says it helps prevent traffic accidents and reduces crime because more people are traveling to and from work or school and conducting daily activities during daylight hours.

But the 1966 law also gave states the authority to opt out. So far, Arizona is the only state among the 48 contiguous states to opt out of Daylight Saving Time, meaning clocks in most of that state are always set to Mountain Standard Time. A portion of northeast Arizona belonging to the Navajo Nation, whose territory also stretches into parts of Utah and New Mexico, still observes Daylight Saving Time.

Before 2006, the state of Indiana, which is divided between the Eastern and Central time zones, did not observe Daylight Saving Time but some individual counties did, creating confusion about what time it was in any given part of the state. That prompted the Indiana Legislature to pass a bill enacting it statewide, regardless of time zones.

Hawaii, where day and night cycles are nearly equal in length, also has opted out of Daylight Saving Time, as have the tropical territories of Puerto Rico, Guam and the U.S. Virgin Islands.

A spokesman for Amtrak said in an interview that the twice-yearly shift causes some inconvenience for the railroad, especially in November when clocks are turned back, forcing trains that are running around 2 a.m. that Sunday to stop for one hour so the clocks can catch up to the train schedule.

Manar's bill passed out of the State Government Committee on May 23 and has since been referred to another committee.

Lawmakers return to the Statehouse on Tuesday, Nov. 12, and will continue through Thursday, Nov. 14.