New additions to event excites more than 500 in attendance 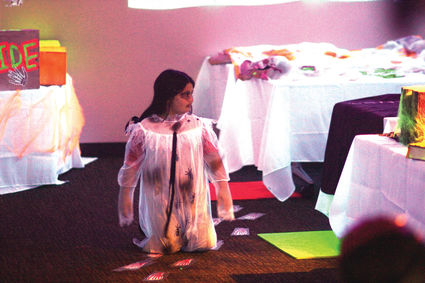 Those who attended the Romeoville White Oak Library District "Haunted Happenings" had the chance to walk through a haunted house.

The Romeoville White Oak Library District was in full effect for the week of Halloween as they hosted the annual "Haunted Happenings" event.

Last year, the library's haunted house was featured as just kid friendly with the purpose to be more fun than scary.

This year, there was a different agenda.

With witches, a replica of the Pennywise from the movie It, a walking ghost, a vampire, coffin, morgue, mad science lab and other props to give viewers the scare they hoped for, were all present in the haunted house.

"There's a lot of animated things and things that are moving around this year so it's not just for children," Smith said. "Everything is glow in the dark this year as well with people moving around and popping out so it's pretty cool."

For children that wanted to test the waters in the new and improved haunted house, there was a route they could go to in the meeting room that gave them the scare they were hoping for, but for those who didn't want to have nightmares, there was a more kid friendly route that was for ages six and under to walk around where actors did not pop out and chasing them. 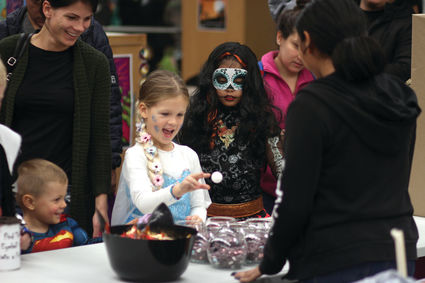 Besides the haunted house, a trunk-or-treat venue was stationed outside where kids had the chance to receive candy from more than 75 vendors that were partnered with the library.

For the children who wanted the chance to show off their arts and crafts skills, drawings and paintings, they were in the programing room where just part of the more than 500 people decided to participate in.

"Everyone was super excited about last year's event and for this year I think it's even going to be better because we have more room now so there will be more room for the kids to hangout," Smith said. "Everyone's super excited to get dressed up and especially for the trunk-or-treating, even the senior citizens are participating so there's something for everyone here."