Lawmakers gearing up for final week of veto session

Ethics reform at top of agenda, but other major issues await action 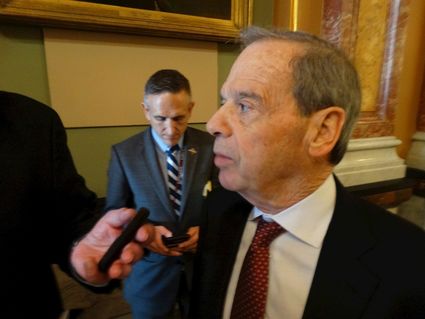 Illinois lawmakers will return to the Statehouse on Tuesday, with all eyes waiting to see what, if any, action will be taken on ethics reform in the General Assembly.

But a host of other issues are on the table as well, including action that would enable the city of Chicago to attract casino developers, follow-up on the landmark adult-use marijuana legalization bill passed during the regular session, regulations on Vaping and flavored tobacco products and labor relations issues flowing from the U.S. Supreme Court's 2018 decision in the Illinois case Janus v. AFSCME.

The push for ethics reform comes amid a sprawling federal investigation in the Chicago area that has already led to charges filed against Democratic Sen. Tom Cullerton for embezzlement and former Democratic Rep. Luis Arroyo, who resigned Nov. 1 after being arrested for bribery.

Part of the probe also focused on Democratic Sen. Martin Sandoval, whose Statehouse office and home were raided in September, although no charges were filed against him. A spokesman for the Senate Democratic Caucus noted Friday agents did not execute a search warrant on his district office in Cicero, as has been reported previously, although he said agents did pay an unannounced visit to that office to ask questions.

Hoping to capitalize on Democrats' vulnerability from the probes, Republicans in the Illinois House introduced a number of ethics reform measures that include strengthening the office of Legislative Inspector General, requiring more financial disclosure for lawmakers, barring members of the General Assembly from working as lobbyists at the local government level and forming a bipartisan task force to study more, comprehensive ethics reform measures.

Some Democrats, including Gov. J.B. Pritzker and Senate President John Cullerton, also endorsed the idea of a task force. The governor additionally proposed requiring lobbyists to disclose more information, including how much they're being paid by their clients, but he suggested much of that work might have to wait until the 2020 regular session.

"We need to look at comprehensive ethics reform in our state," Pritzker told reporters at an event Thursday in Chicago. "And that's why what I've suggested is that with only three legislative days next week, we're not going to be able to get done everything that needs to get done. But we ought to begin."