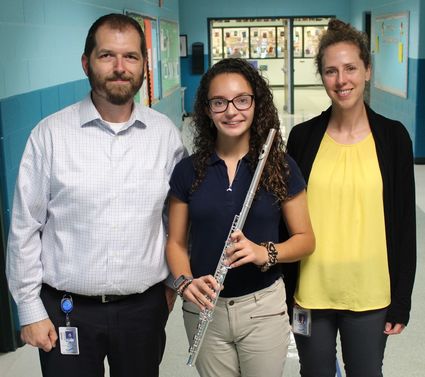 Noelle Klima, who plays the flute, recently won a concerto competition to perform as a featured soloist with the community orchestra, which is sponsored by the University of St. Francis.

Noelle was also named to the elite ILMEA Junior Music Festival for the third year in a row. She has been a member of the Chicago Youth Symphony Orchestra for the past two years.

"It's really exhilarating because I really love the flute," she said, "but I never thought that I would get the opportunity to play with all these different people. It's very gratifying to be able to accomplish these things."

"Noelle is an extremely hard worker and achieves amazing results when she puts her mind to it," Carlton said. "I remember in fifth grade band, she figured out the Harry Potter Theme Song on her own, after about only four to five weeks of playing the flute. I knew at that point I needed to introduce her parents to a private flute instructor to further inspire Noelle's drive and momentum."

Noelle has also received many top awards at solo and ensemble competitions and was principal flute at the Music for All Summer Symposium at Ball State University. She also performs with La Banda Siciliana di Chicago.