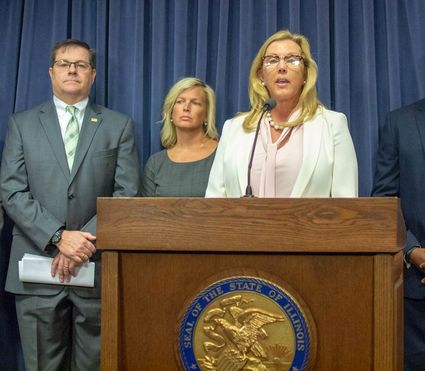 The Illinois Senate voted Wednesday to sustain Democratic Gov. J.B. Pritzker's veto of a bill that would have prohibited him, or any future governor, from seeking federal approval to weaken consumer protection provisions under the Affordable Care Act, also known as Obamacare.

Senate Bill 2026, sponsored by Sen. Sue Rezin, R-Morris, and Rep. Joyce Mason, D-Gurnee, originally passed the Senate unanimously in April. It passed the House by a vote of 75-41 in May.

It would have prohibited any administration from applying for waivers in order to weaken protections, including those protecting people with pre-existing conditions, or reduce coverage requirements under the federal law without legislative approval.

In his veto message, Pritzker, a supporter of the Affordable Care Act, said he did not intend to apply for any such waiver but that the bill would have taken away flexibility the state now has in administering its health insurance programs, including Medicaid and the state employees' health insurance system.

"One of my administration's priorities is to create healthier communities by improving the health of all Illinoisans," Pritzker said. "With that goal in mind, I do not anticipate any circumstances under which my administration would pursue waivers to limit Illinoisans' access to federal programs or benefits. Nonetheless, it's critical to retain our flexibility to innovate and be responsive to the evolving health care needs of the people of the state."

"Why would we leave this decision up to the second floor when we have the ability today to ensure that those with pre-existing conditions get the coverage that they deserve and desperately need," she said.

But Sen. Heather Steans, D-Chicago, argued against an override, noting the General Assembly is involved in the state's Medicaid Managed Care Work Group that works closely with the administration on health care issues.

"There are constantly needs to go to the federal (Centers for Medicare and Medicaid Services) for all sorts of waivers and this really does tie the hands of the administration in being able to take steps that we all agree we should be doing," she said.

The vote to override Pritzker's veto was 27-23, far short of the three-fifths majority, or 36 votes, required under the Illinois Constitution.