Attendees get scare and educational experience of a lifetime in Lisle 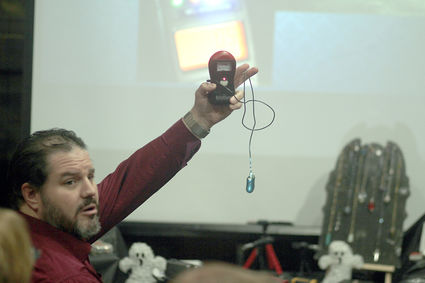 For those who do not require a lot of sleep or are fine with having nightmares, kudos.

Some of those people were in attendance at the Museums at Lisle Station Park where paranormal investigators discussed past findings, evidence and what their job entails.

Kim Pearce, Truman Pearce, Nancy Booker, Audra Weizeorick and Michelle Damadeo all were present giving the crowd a frightening entrance into the world of paranormal investigations.

“At the museum we’re trying to get more engagement and different events going for the public,” said Museum Manager Concetta Gibson. “October is our anniversary month and at the month we like to have events as it gets closer to Halloween time.”

Paranormal investigators, who investigate claims regarding the presence of ghosts, demons, spirits, aliens and other strange and bizarre things, was the first word defined.

Ghost hunters, are people who are in the process of investigating locations that are anticipated to be haunted by ghosts.

What followed as deciphering the difference or any misconceptions of the two terms were different technology the investigators use on their cases.

An electromagnetic field (EMF) detector, a temperature gun, voice recorder to hear suspicious voices or sounds, digital camera, infrared thermometer and vibration and motion detectors were some of the technological devices shown that are necessary to do their jobs.

“We actually investigated some of the areas on this property,” Kim Pearce said. “There’s evidence from that and we also have evidence from some of our other investigations.”

Known as the West Suburban Paranormal Investigators, a non-profit organization, their slogan is “to provide a competent, professional and drama free investigation to our clientele.”

The group that has traveled across the country to offer blessings on houses, detect good and evil spirits and answer questions to groups of people that may be curious about the field is something that interests them collectively.

“We all get along and all have the same goal which is why I think we all love doing this so much,” Booker said.

When asked about a myth or an urban legend that might be a common misconception, Booker said there are plenty of them.

“The biggest myth I would say is lightning, thunder and rain storms seem to make the activity increase and it really doesn’t,” Booker said. “People think because it’s Halloween, more spirits will be active which isn’t true, spirits are active all the time.”

While a display of what paranormal investigators do on cases and shown technology in order to do their job, a look at a couple cases and spooky stories left the audience in awe. 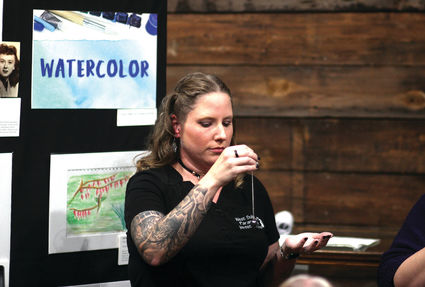 “For me, my daughter when she one-year-old started saying ‘hi’ to someone in the cemetery,” Kim Pearce said. “But what was my scariest experience was when we were at a case with a bunch of proximity meters and they all just started going off at the same time.”

For Booker, it took place a tattoo parlor.

“We have video evidence of a chair moving by itself,” Booker said. “That was really cool to me.”

Although the paranormal investigators said they do understand it’s not for everyone, the message they wanted to send is meant for positivity.

“Not everyone necessarily understands what is in their home and that’s alright,” Weizeorick said. “We want to help them understand who’s there and why they’re there.”