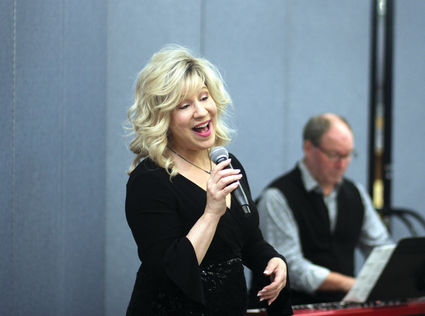 Some might call it the swing era or rhythmic jazz, but the 1940's-50's are universally known and recognized as one of the better music eras.

That era was officially brought to modern day society at the Woodridge Library as Maureen Christine showed off why she is one of the greatest singers and performers in 2019.

"I'm excited because today because I think that libraries are the new presenting arts center," Christine said "It's a wonderful opportunity for people to see quality entertainment that they would normally have to travel all the Away downtown Chicago to see."

Labeled as the "Fabulous 40's and Nifty 50's" concert, more than 70 audience members joined around at the Woodridge Library to listen to the talented singer.

Christine, who has shared the stage with famous musician Barry Manilow, was awarded first place in the nation for the original song she wrote for United Way.

A few of the artists that the songs were a tribute to Sunday afternoon were Rosemary Clooney, Peggy Lee, Frank Sinatra, Vic Damone, The Andrew Sisters and Doris Day.

"Unforgettable", Unchained Melody", "Sentimental Journey", "Boogie Woogie Bugle Boy" and "Fever" were all songs displayed to the crowd as they sang along, and at times, danced.

"I love to sing and I've been singing since I was a little girl," Christine said. "These songs today are songs the audience will understand, that bring back great memories and it's just an amazing song book from the music that all of these great artists wrote in the 40's and 50's."

Christine, who has also resulted in appearances with esteemed symphony orchestras including Northwest Indiana Symphony and the Galesburg Symphony, has appeared with notable concert bands and jazz "big bands" including musicians of the Count Basie Orchestra.

In the Chicago land area, Christine also headlined at such renowned venues such as the Palmer House, The Royal George Cabaret Theatre, the historic Woodstock and Oshkosh Opera Houses and the Holiday Star Plaza Theatre.

Not only has Christine performed at some of the most impressive locations in the area, but she has also made appearances on television.

"I do a lot of different presenting art centers and libraries where they have concerts throughout the suburbs while also traveling throughout the Midwest," Christine said.

When asked about what keeps the talented singer in such high demand and the passion to keep performing at venues, Christine said it's about the connection she makes with the audience.

"I personally enjoy it so much because it's that personal connection you get with those who see you," Christine said. "There's nothing like really looking at somebody in the eye and knowing what you sung, the music or melody has touched their heart in a special way."