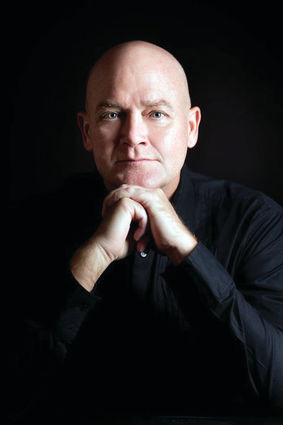 Imagine you are a direct descendent of the devil himself.

For Jeff Mudgett, there is no need to imagine.

For the first 40 years of his life Mudgett, a California lawyer and former Commander in the U.S. Naval Reserve, knew he wasn't like everyone else.

"I didn't know who I was, I didn't know why I had strange feelings," Mudgett said Oct. 19 at the White Oak Library Author Fest, where he was the featured author. "I knew the emotions most people carried in their life and the sympathies they had weren't natural to me. They were something I had to build into my life because I wanted to be like everyone else, but I didn't have them.

"I never walked around with a need to kill someone, but I knew I was different. There is a little psychopath in all of us, but we control it."

His questions of why he was different were answered more than 20 years ago when Mudgett found out he is the great-great grandson of H.H. Holmes – America's first serial killer.

He learned the secret at a family gathering.

His grandmother, who was fascinated with family genealogy, was talking about her theory that they were related Gen. Robert E. Lee when his grandfather broke his silence of 60 years.

"There were about 17 of us that night at my grandparents home in Itascadero, Ca. We are a little bit of a ruckus family," Mudgett said. "My grandfather was a very stoic man and he sat and listened to my grandmother talk until he had enough and he slammed his chair against the wall, the picture came down – I can still hear the crash and he told her she was wrong and he had a secret he had kept to himself – that we were related to H.H. Holmes. I will never forget that he never took his eyes off me. This wasn't for my cousins or my brother or sister or my dad – he was speaking to me."

Holmes, who's birth name was Herman Webster Mudgett, was born roughly a month after the Civil War broke out to an affluent family in Gilmanton, NH. He married his first wife, Clara, in New Hampshire in 1878, had a son, but he eventually abandoned them and left for Chicago. In 1887, he married his second of three wives, Myrta Belknap, and lived in Wilmette.

Holmes killed many of his victims in a mixed-use building he owned in Chicago in the late 1800s – less than five miles from the site of the 1893 World's Fair. The building became known as the Murder Castle.

"This is a guy that graduated with a doctorate degree from the University of Michigan, he had an IQ off the charts," Mudgett said. "He could have been a Louis Pasteur if he wanted to. He was walking around the World's Fair with Tesla and Edison and the Wright Brothers. He could have been designing medicine, instead he was on the prowl for innocent victims."

It is believed that Holmes may have been responsible for up to 200 murders in the United States, but Mudgett believes he was also responsible for at least one murder in England that was attributed to Jack the Ripper.

The show traced Mudgett's journey into the mind of his great-great-grandfather and his goal to prove America's first serial killer was Jack the Ripper.

"In my opinion, we have solved that," Mudgett said. "I had interesting conversations with Scotland Yard and they have admitted they knew there was a copycat for decades. (Holmes) was Jack the Ripper because he was the one that wrote the 'Dear Boss' letter and coined the phrase. On the show, there were two linguists who said the letter was written by an educated American trying to sound British. It is my theory that Holmes wrote Dear Boss and murdered Catherine Eddowes. There were already two murders before that. The Mary Kelly murder after had no similar M.O. at all.

"History has allowed for 130 years, Jack the Ripper to be the killer of five women in London. They are starting to realize now that it was not one man."

The 'Dear Boss' letter was penned in red ink and received by the Central News Agency of London in September of 1888 where the killer gave himself the now famous moniker.

Mudgett also wrote the book, "Bloodstains" a book based on the true story of Mudgett finding out who he was related to and the direction his life took from that day forward.

"Imagine being told that and then having to absorb that in a short amount of time," Mudgett said. "I decided to research his life instead of running away like my family had for 100 years. My life (as a lawyer) was investigation and solving mysteries and this was dumped in my lap and I am not the kind of person to run from this."

Mudgett is in discussion about two more television shows as well as a feature film on his life and how he has dealt with the horrifying secret.

He is also trying to explore the grounds of Holmes infamous murder castle, located at South Wallace and 63rd streets in Chicago, now the location of the Englewood Post Office. 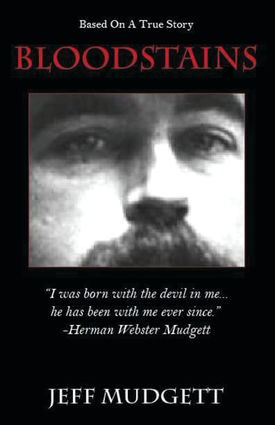 Mudgett has sold more than 20,000 copies of his book 'Bloodstains'

The murder castle was a booby-trapped former hotel with soundproof rooms, secret passages and a disorienting maze of hallways and staircases. The rooms were outfitted with trapdoors and chutes that dropped Holmes' victims to the building's basement, which housed vats of acid, a crematorium, and other ways to dispose of bodies.

"We are trying to get the (federal government) to allow us excavate the ground," Mudgett said of digging on Post Office property. "We have a TV interest that will pay for it if they can film as we do it, but it is the feds, so I don't know if they will allow it."

While it is a wait-and-see game for Mudgett's target of unearthing remnants of the murder castle, but no matter the outcome, he will never stop trying to uncover secrets and stories of his most notorious relative.