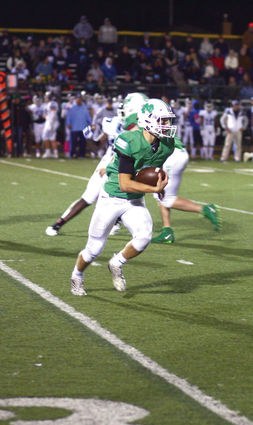 Jimmie Fidanzi was one of several Dons that saw time at running back with the loss of Julian Schurr.

Looking at the scoreboard at Legends Field on the campus of Notre Dame College Prep and seeing a 21-0 loss by the Dons does not in any way tell the tale of the game.

Notre Dame was without standout running back Julian Schurr, who will be sidelined for at least one more week with a shoulder injury.

"It is not a 21-0 game, but we didn't get what we needed to get offensively," said coach Mike Hennessey. "One loss will not define the season, but it is tough to experience a loss after you have done that well, but I think we are resilient enough to bounce back."

Of the 21 points on the board for the Roadrunners, only 14 were scored by the Nazareth offense, as the first score came on an interception in the first quarter.

The 14 points are the fewest scored by University of Michigan-bound quarterback JJ McCarthy at the Roadrunner offense.

The defense had multiple stops on fourth down, but the Nazareth running game ripped off a pair of big runs. One leading to a McCarthy touchdown pass and the other, a 75-yard scoring run with less than a minute remaining in the game.

"We played great defense," Hennessey said. "It probably should have been a 7-0 game. We throw a pick (early) and the last play. We called a timeout because you never know what can happen in football and we were not going to give in. That has been the case all season long. We have relied on our defense to get us the ball or get us good field position."

The Dons travel to Chicago next week to face 5-3 St. Rita.

With a playoff berth already locked up, Notre Dame needs a win to guarantee a first-round home game.

"I would think (we need to win for that to happen) because there will be a lot of good 7-2 like Loyola and Maine South," Hennessey said. "A home game would be fantastic for the kids."

The win will have to come without Schurr in the lineup again and Jimmie Fidanzi and company filling the void in the offensive backfield.

"Jimmie did a helluva job and that is what we expected. You hate to say next man up, but that is the case and we are lucky we have some depth," Hennessey said. "(Schurr) is a spectacular player and we get him the ball all over the place. (His return) is up to the doctor. He has a separated shoulder and we would love and hope that he is back in two weeks, but we don't know if that is going to happen."

No matter if Shurr is running the ball or not, he showed his dedication to the team as he watched Friday night from the sidelines in full uniform, including shoulder pads and helmet.

"He texted me and said he was going to suit up and I told him just stay away from my son (coach Eric Hennessey) while he is calling the plays, because he may put you in," Mike Hennessey joked. "That is what leadership is all about, you come in and you are part of things and that is what he did. He will rally them and he will do his best. We will miss him, that's for sure."