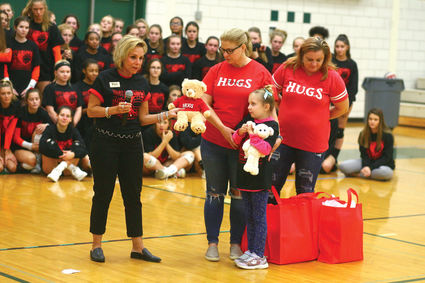 Seven-year-old Addy Boggs is given a H.U.G.S bear by co-founder of Shorewood H.U.G.S Laura Charland.

When the Oct. 15 volleyball game between Minooka and Plainfield Central ended, the scoreboard said the visiting Indians had won 27-25, 25-17.

The real winner, however, was Addy Boggs. Addy is a student at Circle Center Grade School in Yorkville and has been diagnosed with Batten Disease CLN3 - a very rare, genetic disease that to this point has no cure.

Of the many symptoms of Batten Disease, one is vision loss, which she is already starting to experience.

For the past seven years the Minooka girls volleyball team has partnered with Shorewood H.U.G.S to raise money to help grant a wish and put a smile on the face of people in need.

"This has been seven years and when we started we were only on wish 200," said H.U.G.S Founding Member Laura Charland. "Addy is wish 841. Events like this allow us to touch so many, and not just pediatric."

The organization was started by Charland and four friends as a way to give back.

"We all live in Shorewood but all of our kids went to different grade schools and we decided we wanted to help people in our community," she said.

All of the money raised stays within a 20-mile radius of Shorewood and while H.U.G.S main fundraiser is the annual Chocolate Ball, which will be held Feb. 1 at the Holiday Inn and Suites in Joliet, the help both Minooka and Plainfield Central give to the cause is enormous.

"The girls themselves went door-to-door themselves to get donations for raffle baskets," Charland said. "It is teaching them to help people in their community."

The players enjoyed getting involved in raising funds for a good cause. "As the two teams come together, we want to make whoever we are doing the wish for feels really special," said Minooka senior Samantha Zurawski. "We want to give them a big, warm welcome when they walk into the gym and raise as much money as we can for them and their family because what they are going through is hard. We want the one goal to be special. When we heard (Addy's) story, we just wanted to come together for her."

The two schools are two of the oldest in the Southwest Prairie Conference as well as historically two of the best, so the game between the two programs is always circled on the calendar in both locker rooms.

For the past few years, they have partnered in the Hits for H.U.G.S game, coming together for a cause before doing battle on the court.

"Working with Plainfield Central has really helped the cause because (Plainfield Central coach Erik Vogt) and I believe in the same things," said Minooka coach Carrie Prosek. "This is a great event and we are so happy to join with them because it used to just be us."

"When we are able to help an organization like Shorewood H.U.G.S, it makes the environment great," Vogt said. "Anytime you can bring two teams together that are always competing for championships and compete for something that is much more important like our community, it is a great feeling."