She is one of only three returning seniors - one fewer than should be on the roster.

Malone inherited the starting setter role from classmate Beth Dunlap, who died on February 22, three days after being struck by an alleged inebriated driver while crossing the street outside of school.

Dunlap was a Division I recruit who guided the Trojans to their best season ever last fall, culminating in a loss to Marist in the Class 4A state championship game.

Malone was a contributor as a defensive specialist last year. While she enjoys leading the team, she'd be fine if she had stayed on the back row.

"I'm really trying to be like Beth, be a strong leader and keep everyone up," Malone said. "We know it's sad, but she would want us to play our best and not be sad."

Despite missing a couple weeks with a knee injury, Malone has kept a young, inexperienced team above .500. Downers North coach Mark Wasik is not surprised.

While she isn't as talented as Dunlap, Malone said she is buoyed by the memory of her bright personality and fierce competitiveness.

"I know she'd be cheering me on every step of the way," Malone said. "Even when I got injured, she would be hyping me up. I know she would be my No. 1 fan, even the way I got the spot."

The Trojans honored Dunlap's memory with a special ceremony before their Oct. 15 game with York. The biggest crowd of the year turned out to donate money for the Beth Dunlap 18 Fund, a charity established by Dunlap's parents to support volleyball players in need.

Everyone who donated was given a blue LED bracelet, which lit up the darkened gym during the ceremony, which included 18 seconds of silence.

Wasik and assistant coach Meghan Nauss came up with the idea.

"When she passed, I feel like one of the most reoccurring themes that came up when people talk about Beth is, she's such a bright light," Nauss said. "She shined, so that kind of provided the motivation to shine on her behalf."

The seniors, including defensive specialist Aleks Glowik, have tried to fill shoes that cannot be replaced.

"We're really trying to follow in Beth's footsteps as strong leaders because she was always super welcoming to younger players," senior middle hitter Morgan Wendt said. "Since we have such a young team, we're just trying to bring the team together and be super supportive of one another, just like Beth used to do."

During the ceremony, Wasik announced that more than $17,000 has been raised for the Beth Dunlap 18 Fund. That total didn't include sales of bracelets, Beth Strong shirts and baked goods at that night's game.

"I think (that support) is big because Beth is always such an inspiration to us," Wendt said. "She was such a great player.

"She really is a light guiding us and telling us what to do and inspiring us to do well this season and to push ourselves."

Dealing with the grief of losing their teammate, of course, has been difficult but the Trojans are coping.

"It's been hard but she's such an inspiration to push hard," Wendt said. "She loved this sport so much, more than anyone I know, and so her passion for the sport just drives me to do my best every day."

The Trojans were heartened by the large crowd and how the community has supported the team. 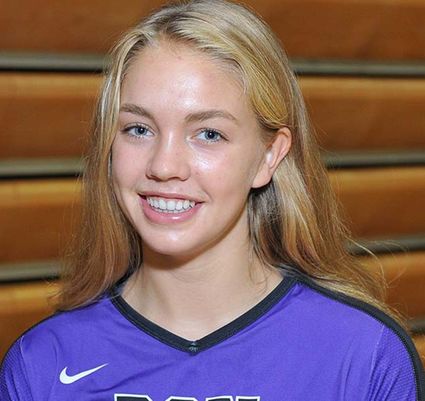 "I'm really glad so many people support her," Malone said. "I always knew she affected so many people and (it is great that) people are offering to donate and come out and show their support for her."

That helps the players stay strong through a difficult season.

"We've done our best to allow them times to talk about her, to know that she is with us throughout this whole process, not necessarily to always make this about Beth but to make this about these girls plus Beth. That's how we're moving forward."