A win this week would put Joliet West in the IHSA playoffs as a conference champion, despite 4-5 mark 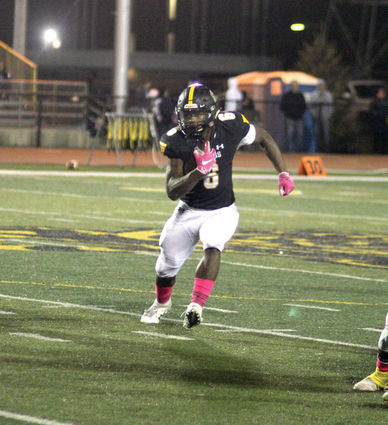 In a game that was significant for both teams with a conference title on the line, Joliet West defeated Plainfield South 22-13.

The Tigers, who entered the game one game behind Plainfield South and Plainfield East, needed the win to keep their playoff hopes alive.

A South win would have locked up the Southwest Prairie Conference East Division title, however, the West win gives the Tigers a shot at the title and a playoff berth, despite a best-case 4-5 overall record.

The Cougars will finish out the regular season against Romeoville, Plainfield East will host Joliet Central Steelmen and West will travel to Plainfield Central. The three opponents are all 1-7.

Wins by all three would result in a tiebreaker, which is determined by fewest combined points in head-to-head games.

With 36 points allowed, West owns the tiebreaker over the Cougars (49 points) and Bengals (52). Both South and East would be projected to be in the playoffs based on a 5-4 record and the number of wins by opponents.

West used momentum of senior night to make sure it remained in the playoff picture.

"We came into the game wanting to protect the football and play responsibility football on defense," said West coach Bill Lech. "I think we were confident that we're able to run the ball and it was just a total team effort tonight."

A five-yard rushing touchdown by junior running back Keith Bronson put the Cougars on the scoreboard with 5-minutes, 11-seconds remaining in the first quarter, but the Tigers were stingy the rest of the game.

A 32-yard field goal by senior Connor Halla cut the Cougar lead to 7-3, and an interception by senior cornerback Kinsyn Shelby, one of three interceptions by the Tigers defense on the night, crushed any momentum the Cougars had.

Two possessions after the Tiger interception, a 4-yard end-around by senior receiver Samuel Mono gave the Tigers their first lead of the game with 2:10 left in the first half. Another field goal by Halla put the Tigers up 13-7 at the half.

A Tiger safety on snap over the head of the Cougar punter in the end zone was only scoring in the third quarer and put the Tigers up 15-7.

To start off the fourth, a two-yard rushing touchdown by junior running back Trent Howland (27 carries, 216 yards) extended the Tiger lead to 22-7.

"At the end of the day it was a win for us," Howland said. "We had to really come out here and show everybody what we can do."

Mono again followed the Howland touchdown with his second score of the day on a eight-yard touchdown pass from junior quarterback Brenden McGee that put the game out of reach for the Cougars with just 3:50 left on the clock.

"Tonight just wasn't our night," said Cougar junior quarterback Nicholas Schultz. "A loss is a loss but it's also a lesson, we just have to finish strong next week."