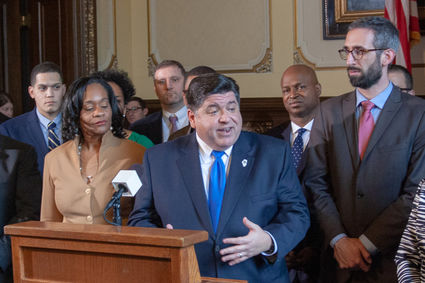 For the first time since the General Assembly adjourned its historic regular legislative session in early June, lawmakers will be back at the Capitol for more legislative action next week.

The annual "veto session," so called because it's the Legislature's first opportunity to override the governor's vetoes each year, will convene Oct. 28-30 and Nov. 12-14.

While the session had served as a battleground between former Republican Gov. Bruce Rauner and Democrats in the General Assembly in recent years, this year's installment will feature a Statehouse under complete Democratic control.

And since Democratic Gov. J.B. Pritzker completed virtually his entire first-year legislative agenda earlier this year and vetoed only eight of the 599 bills that passed both chambers, a number of new legislative proposals have surfaced for potential action for the upcoming session.

In recent days, a task force formed by Pritzker recommended the state consolidate 649 suburban and downstate police and firefighter pension funds into just two, saying the move would generate billions of dollars in additional earnings and cut administrative costs over the next 20 years.

The funds would be consolidated into one each for firefighters and police. The Illinois Fraternal Order of Police Labor Council "expressed strong concerns about the recommendations" of the task force in a statement, while the Associated Fire Fighters of Illinois said it supports the recommendations.

Pritzker said this week language for the bill "is being put together now."

"There are many people who understand that if we want to keep property taxes down, we want to bring them down, that we want to stop the hikes that are occurring everywhere, we've got to attack property taxes everywhere we can," he said. "One of them is to attack it by making sure that our police and fire pensions are reasonably well funded."

The bill would not, however, address the more than $130 billion in unfunded pension liabilities facing state government, as the funds that would be consolidated are funded by local municipalities, not the state.

Advocates and lawmakers are backing a pair of bills to make it far more difficult to emit ethylene oxide, a cancer-causing gas used in manufacturing and medical supply sterilization processes, in densely populated areas in Illinois.

Pritzker's office has said he would sign either or both of the bills despite opposition from manufacturing and business industries, and the sponsors of the bills are ready to move in veto session as well.

A panel discussion of the two bills earlier this month featured a look back at the year-long process which led Sterigenics, a medical supply sterilization plant linked to an "elevated cancer risk" in the Willowbrook area by the federal Agency for Toxic Substance and Disease Registry, to abandon its plans to reopen.

In her budget address this week, Chicago Mayor Lori Lightfoot called on state lawmakers to authorize the city to increase its real estate transfer tax, to "support a Chicago casino," and to "develop a statewide pension reform package."

While details of a "statewide pension reform package" remain murky and it is unclear if the mayor will find support for the real estate transfer tax change, Emily Bittner, spokeswoman for Pritzker, said the governor encourages dialogue on the city's proposals.

"Cities around the state face enormous fiscal challenges, and the governor believes that balancing Chicago's budget is an important step in stabilizing our overall fiscal health to benefit all our state's residents. The governor will encourage the General Assembly to give the mayor's proposals their full consideration during the veto session," she said.

Legislation addressing the Chicago casino could be part of a broader package making changes to a massive gambling expansion bill which passed in June.

A feasibility study released earlier this year said the tax structure approved for a Chicago casino in the gambling expansion bill is "very onerous" and would create an effective tax rate of approximately 72 percent for the casino operator. Lightfoot is seeking changes to that structure among other rewrites to the Chicago portion of the bill.

Democratic state lawmakers have hosted several news conferences in recent weeks calling for a bill to cap out-of-pocket insulin costs at $100 per month for some insurance plans.

Senate Bill 667 (Amendment 1) would create the cap on state-regulated plans, but not for those that are subject to federal regulation.

While a handful of energy reforms have all been introduced independently, the prospect of a landmark regulatory reform bill combining all or most of them has stalled amid sweeping federal investigations relating to several Statehouse regulars, including at least one state senator and representatives of energy giant ComEd.

ComEd's parent company, Exelon, was calling for a bill to reform electricity capacity markets in regular session, but recent news of FBI raids related to the organization's lobbying efforts has stalled any progress on that legislation.

Despite calls from renewable energy advocates to pass a pair of bills dubbed the Path to 100 Act and Clean Energy Jobs Act, which they say would move the state toward a carbon-free energy future, Pritzker has said energy changes are unlikely to move in veto session.

"It's certainly something that's being considered as part of a broader energy package," Pritzker said of the Clean Energy Jobs Act, though he added, "I don't know that we'll be able to get to it during the veto session."

The ongoing federal probes that have seemingly delayed the energy legislation have also led one lawmaker to call for a State Ethics Task Force to tighten ethics rules within Illinois government.

Tony McCombie, a Savanna Republican, said she plans to introduce that bill and hopes to have it called during veto session. There's no indication it will be called for a vote, however, as a spokesperson for Democratic House Speaker Mike Madigan said he could not comment on the bill last week as it had not yet been filed.

Deputy Gov. Christian Mitchell, who helped write the successful marijuana legalization bill earlier this year, told Capitol News Illinois not to expect big changes to the legislation as part of a follow-up measure, known as a trailer bill.

"What we have said to everyone is that the trailer bill for veto is going to be highly technical stuff that needs to change in order to ensure a smooth rollout into January 1, (2020). It is not a forum to relitigate issues on which folks lost out in negotiations," he said last month.

There's been pressure on lawmakers from anti-smoking groups to better define allowable consumption of marijuana in public places, and the bill's Senate sponsor said such a language change would be part of discussions for a trailer bill.

Mitchell, however, said public consumption is needed in some capacity to prevent "de facto prohibition" for people who live in apartments which ban smoking. Per the legislation as it stands right now, local governments are allowed to exempt facilities from the Smoke Free Illinois Act, which bans smoking anything in public places.

Greater e-cigarette regulations could come up for a vote as well, as advocates have called for the addition of e-cigarettes to the list of products banned under the Smoke Free Illinois Act. Another proposal would ban flavored e-cigarette cartridges, but it is unclear whether the measures will move in veto session.

Despite the session's namesake, there won't be too many vetoes to consider. Four of the eight bills vetoed by Pritzker were "duplicative," "substantially similar" or "identical" language to other legislation passed in the regular session, per his veto messages.

One of the others, Senate Bill 2128, pertaining to court reporters, was vetoed at the request of its Senate sponsor, state Sen. Don Harmon, D-Oak Park, due to unforeseen complications from the bill's language. Harmon's office said he will not take up the bill in veto session, but will rewrite a new proposal in the future.

Another, Senate Bill 2124, pertains to disciplinary options available to schools when a student brings a look-alike weapon into school facilities and causes a panic. The governor vetoed that bill because of language that starts with expulsion for the student but allows the local superintendent to lessen the punishment.

That bill's sponsor, Sen. Chapin Rose, R-Mahomet, said at the time he and the governor would work on an alternative proposal to be heard either in veto session or in the spring, but an override is not in the cards.

The governor also vetoed Senate Bill 2026, a bill that would have required General Assembly approval before the state could request a waiver from Affordable Care Act requirements in order to reduce protections or coverage offered through the state employee group health insurance program.

Pritzker said the veto allows the governor's office to maintain "flexibility" by allowing waivers to be requested without General Assembly approval. Still, he did "not anticipate any circumstances" in which his administration "would pursue waivers to limit Illinoisans' access to federal programs or benefits."

Sen. Sue Rezin, a Morris Republican who sponsored the bill, said this week she still plans to call for an override vote.

"I think we will have the votes to override," she said, noting it passed with veto-proof majorities in each chamber and she does not anticipate any changed votes.

Pritzker's final substantial veto was of the amendatory variety in which he suggested partial changes to House Bill 3222, which pertains to several land transfers.

He struck a specific portion of the bill which would have directed the Illinois Medical District Commission – a public corporation – to execute and deliver a quit claim deed for property it owns at no cost.

"Granting this land conveyance would not be the best policy for Illinois or taxpayers," Pritzker wrote in his veto message. "Allowing this conveyance would amount to unfair practice to the other organization that use property in the Illinois Medical District. I am returning this bill with specific recommendations to address these concerns, while still ensuing (sic) the remaining land transfers continue per the intent of the General Assembly."

The General Assembly can move the bill forward with the amendment or without it, or it could let the bill die entirely.

Several other bills have been filed for the veto session, but it remains unclear which ones will move.

These include measures allowing college student athletes to get paid for endorsement deals, ensuring CBD products sold in the state meet testing requirements, banning red light cameras, and fine-tuning how Chicago Public Schools release some state funds as part of the evidence-based school funding formulaAnother bill scheduled for a committee hearing would take aim at the state's teacher shortage, expanding access to Monetary Award Program grants to those seeking their teaching certificate.

Several other bills have been introduced in the House, and more are expected to be introduced Monday in the Senate.