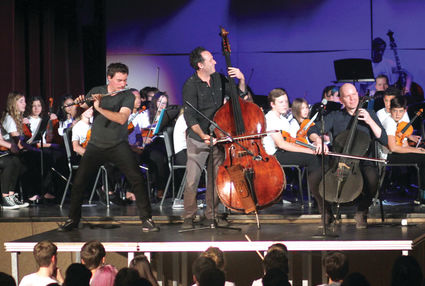 An experience of a lifetime came to Downers Grove North High School where the professional music group, "PROJECT Trio" partnered with the local Orchestras where there were more than 200 total performers.

"The schools in both 58 and 99 are playing with such an amazing internationally renowned ensemble called the PROJECT Trio," said Orchestra Director Jennifer Mullen. "This group of guys have been playing since college and we're very fortunate to have them here tonight."

PROJECT Trio, who had one of the first videos on YouTube to go viral in 2005, is a high-energy chamber music ensemble comprised of three virtuosic composer and performers from Brooklyn, NY.

Peter Seymour (double bass), Greg Patillo (flute) and Eric Stephenson (cello) all had a verity of pieces that excited the crowd at North, but it's the different blends of music that they are able to perform that makes them popular.

A blended version of their classical training with an electric taste in musical styles, PROJECT Trio has made an impact on audiences of all ages.

"Sweet Pea", "Dr. Nick", "Djangish", "Bouree", "Hungarian Dance", "William Tell Overture", "Winter in June", and "Raga Raja" were just some of the pieces played in collaboration with the students from District 58 and 99.

"This is their third time playing in Downers Grove with this Orchestra and it's been about six years since they last performed here," Mullen said. "This is a group who would normally play with professionals where someone would have to pay $30 or $40 just to attend, so for them to be here it's pretty special." 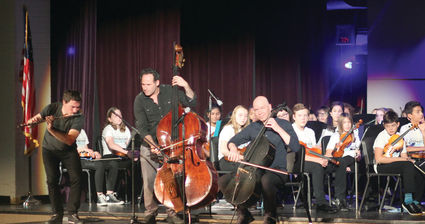 District 58 and 99 get opportunity of a life-time with famous musicians.

The Trio was forged out of a collective desire to draw new and diverse audiences by performing high energy, top quality music and using social media to broaden their reach beyond the concert stage and classroom.

The Trio now has its own YouTube channel, which has more than 85 million views and 100,000 subscribers, making PROJECT Trio one of the most watched instrumental ensembles on the Internet.

What Mullen described as a chance of a lifetime getting the opportunity to direct, she also said that this will be an experience that the students will never forget as long as they live.

"It's great for me and very special for me to be able to do something like this," Mullen said. "However, for the kids who are still very young in their musical careers to be able to play with and see such an amazing ensemble will be something that they will never forget and hopefully always cherish."