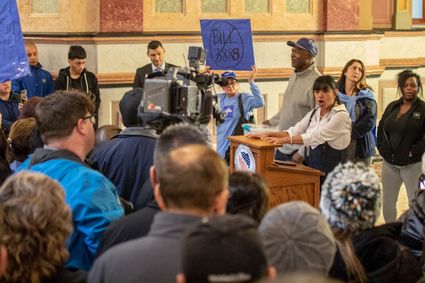 The House Energy and Environment Committee diverged Monday on a pair of highly-publicized bills aiming to better regulate ethylene oxide gas emissions in the state, passing one while letting another remain in committee.

The opposing votes represented a largely partisan split in a months-long effort from lawmakers to impose stricter regulations on, and create greater local authority to regulate, a known cancer-causing gas used in medical supply sterilization and manufacturing processes.

House Bill 3885, sponsored by House Minority Leader Jim Durkin, a Western Springs Republican, failed to pass with 11 voting in favor and 17, all Democrats, voting present. That bill would have given home rule municipalities the authority to ban ethylene oxide emissions from sterilization facilities within their communities.

Democrats voted present on the bill after Durkin would not commit to any Republican support for House Bill 3888, a stronger ethylene oxide regulatory bill sponsored by Waukegan Democratic Rep. Rita Mayfield, which was to be heard later in the committee hearing.

"What stops a non-home rule unit of government from setting up an (ethylene oxide) facility next door and still emitting (ethylene oxide) toxins into the air, thereby contaminating the residents that live in the home rule community?" he asked.

Durkin said it's possible the non-home rule community could require a referendum, but his bill did not address the matter.

Home rule is a status that state law confers to any municipality with more than 25,000 residents or other municipalities that choose to adopt it by referendum. Those municipalities have greater authority to control their own local affairs. According to the Illinois Municipal League, 217 of Illinois' 1,298 incorporated municipalities have home rule powers.

After his bill received mostly present votes and while the committee was still hearing Mayfield's measure, Durkin's office released a statement blasting the Democrats on the committee.

"The actions taken today by the House Democrats to block my legislation that would allow local municipalities to ban the use of ethylene oxide just proves they put partisan politics ahead of the health and safety of Illinois residents, including their own constituents," Durkin said in the statement.

The hearing of Mayfield's bill followed a Statehouse protest of the legislation on behalf of Medline Industries. Many of the 200-plus protestors organized by the League of United Latin American Citizens said they were employees of Medline industries and would lose their jobs if the bill passed.

Medline employs about 700 people in the Lake County city of Waukegan, and nearly two-thirds of them are Hispanic, a spokesperson for LULAC said.

Mayfield, however, said her bill "does not require any company to close," but rather "asks them" to move away from schools and day cares, or "utilize an alternative sterilization method that may require them to hire more people."

But industry advocates testified that for some medical supplies, including many surgical packs, ethylene oxide is the only allowable sterilization chemical. It's most effective, they said, because it permeates plastic and can sterilize the equipment without jeopardizing the structure of the supplies - something alternative methods such as radiation cannot do.

They called attention to a recent U.S. Food and Drug Administration statement which warned of "growing concerns about the future availability of sterile medical devices and impending medical device shortages."

"Although medical devices can be sterilized by several methods, ethylene oxide is the most common method of sterilization of medical devices in the U.S. and is a well-established and scientifically-proven method of preventing harmful microorganisms from reproducing and causing infections," the FDA said in the statement. "More than 20 billion devices sold in the U.S. every year are sterilized with ethylene oxide, accounting for approximately 50 percent of devices that require sterilization."

Rep. Deanne Mazzochi, an Elmhurst Republican who helped lead the effort to shut down DuPage County ethylene oxide emitter Sterigenics, voted present on Mayfield's bill after lengthy questioning of those testifying on both sides.

Mayfield's bill and an amendment to it passed the committee with 16 votes in favor, five against and two voting present.

The amendment changed the allowable boundaries from Mayfield's initial bill, which was debated in subject matter hearings earlier this year. With it, emissions are allowable in counties with an average population density of 1,000 people per square mile or more, as long as it is "at the center of a 10-mile radius within which there is a population density of 100 people or fewer per square mile." It also must be at least 10 miles from a registered day care facility.

Emissions of the gas at those locations would be limited to 30 pounds annually by 2021, per the bill.

Industry advocates, however, said Medline would be forced to close if the bill, as they understood it, were to pass.

Medline Industries, their representatives said, invested $15 million in emissions control infrastructure to fall in line with those regulations.

House Bill 3888 moves to the full House for a vote. Gov. J.B. Pritkzer's office has said he would sign either of the two regulatory bills if they pass both chambers.