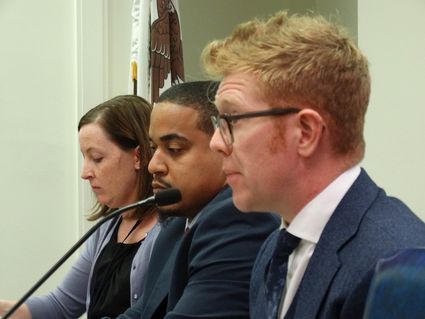 Chicago Teachers Union representatives are asking lawmakers for legislation that would force Chicago Public Schools to direct more of its state funding to services aimed at low-income students, English language learners and students with special needs. This comes amid a strike now stretching into its second week.

"There is no equity provision for funding CPS students in a student-based budgeting model," he told an elementary and secondary education appropriations panel. "Each student is assigned a base funding regardless of the need of that student."

The Evidence Based Funding formula was adopted in 2017. Its purpose is to determine what an "adequate" level of funding would be for each district based on its size and demographic factors, such as the number of students living in poverty, the number of English language learners and the number who receive special education services.

When all state, local and federal funds are added up, CPS is currently funded at about 65 percent of adequacy.

Teachers in the nation's third-largest district have been on strike since Oct. 17. Among their key demands are smaller class sizes and more social workers and school librarians, particularly in buildings with large concentrations of high-needs students.

In an interview after the committee hearing, Hilgendorf said the legislation is aimed at the same goals at the heart of the contract talks.

"I think these things are one and the same," he said. "The contract talks have been about making sure that there's appropriate amounts of staffing for social workers, school nurses, case managers for special education students, and trying to make sure that the state, which has said all those things are vital to having a high-functioning school system ... should be part of the contract talks."

The school district, however, opposes the bill, arguing it would greatly restrict how CPS spends more than $1.1 billion out of the $1.7 billion it receives through the formula.

"By passing (House Bill) 3917, we'll be restricting close to two-thirds of the district's allocation and will force CPS to cut back funding for its most basic areas of investment," G. Tito Quiñones, a lobbyist for CPS, told lawmakers. "This will have a substantially detrimental impact on students' outcomes."

In particular, he said, it would harm schools in certain Chicago neighborhoods where enrollment is declining due to rapidly rising housing costs that make those areas unaffordable for families with children. He said CPS has been trying to maintain funding for those districts so the families that do remain can still receive a full range of services.

Republicans on the panel, including Rep. Avery Bourne, of Raymond, also expressed skepticism. She argued it was never the intent of Evidence Based Funding to take away the local control that individual school districts have over their budgets.

"It wasn't meant to be a list of unfunded mandates," she said. "That was very clear in many, many discussions and that's something that we on the Republican side of the aisle were very adamant about."

Meanwhile, the teachers strike in Chicago was expected to continue into its ninth day on Tuesday.

During a news conference Monday morning, Democratic Gov. J.B. Pritzker, of Chicago, said he thinks the strike has already lasted too long, but he gave no indication he would use the weight of his office in an effort to mediate a solution.

"There is a fair bargaining process that is going on now," he said. "We've seen it back and forth. I think it's actually been fairly transparent. They seem to be down to just a few issues, so I'm very hopeful that they'll be able to work it out."