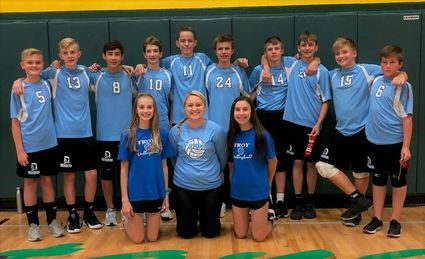 In the tournament, which was held at Homer Junior High School, the Trojans beat Martino Middle School in the first round, then went on to defeat Manhattan Junior High in the second round.

"The boys made it into the championship game to play against Homer Junior High School," Coach Stacey Wernert said. "Homer has been our biggest competition the entire season, giving us our only losses. Unfortunately, we lost a close one in the final."

The team ended the season 8-3, including the conference tournament.

"They had a great season," Wernert said. "I am proud of how all the boys played in the tournament and the entire season. They are a very skilled, respectful and hard-working team. They were led by our captains and setters, Landon Brouwer and Thomas Fellows. We were also led by our outside hitters, Nathan Fleischauer and Aiden Rodriguez. All four boys showed exemplary leadership and great all-around play."

"These athletes did a great job on and off the court," said Troy Athletics Director Meagan DeGroot. "This season starts before school, so they put in a lot of time and effort to get where they made it in the tournament."