Men's bowlers rakned No. 5 in NAIA 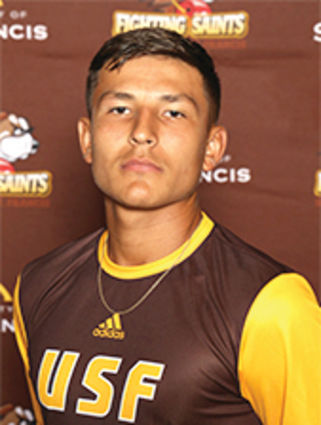 The 2019-20 University of St. Francis men's bowling team is now ranked tied for fifth in the latest (Oct. 9) NAIA Men's Bowling Coaches' Top 10 Poll, which was released this Thursday (Oct. 10).

The national poll was voted upon by a panel of head coaches representing each of the NAIA-affiliated conferences.

The Saints, which is coached by seventh-year head coach Tony Talley, made their 2019-20 season debut this past weekend (Oct. 5-6) at the ninth annual Midwest Collegiate Championships in Wauwatosa, Wis., and concluded the two-day tournament with a 20th-place finish out of 40 teams.

Winds, which ranged from 15-to-25 miles per hour throughout the contest with gusts as high as 35 mph, played a big role in the matchup.

In fact, between the two teams, only one shot on goal was recorded when the teams went against the wind.

It was her third goal of the season.

USF recorded four other shots on goal in the opening 45 minutes, but were denied each time by Holy Cross netminder Chloe Kane.

In the second half, Holy Cross (6-6, 3-4) went right to work when it had the wind at its back, tying the contest at 1-1 on the first of two Lauren Cernak goals three minutes in.

USF was never able to counter in the closing 45 minutes, failing to put a shot on goal during that time and managing just two shots overall after the break.

Holy Cross added an insurance tally in the closing ten seconds to wrap up the match's scoring.

For the contest, Holy Cross totaled 25 shots, 18 of which came in the second half, where the guests also registered nine of their ten shots on goal.

St. Francis was held to just nine shots total for the match.

In a match dominated by each team's goalkeeper, the University of St. Francis men's soccer team and Holy Cross College were unable to get on the scoreboard in 110 minutes of action this Saturday (Oct. 12) afternoon as the Chicagoland Collegiate Athletic Conference (CCAC) match ended in a 0-0 double overtime draw on the ATI Field turf at Joliet Memorial Stadium.

The double overtime match represented USF's third one this season and second scoreless tie as the Fighting Saints have yet to win or lose such a contest this fall.

On the day, both teams had ample opportunities throughout to score. USF had a great opportunity to end the match in the first overtime, but midfielder Mason Messina (SR/Shorewood, Ill.)'s header at almost point-blank range was denied by HC goalkeeper Lewis Tomlinson at 4:54 into the extra session.

In the end, USF outshot Holy Cross by a 21-15 margin as the Fighting Saints fired 14 shots on net in the contest while the Saints put 10 shots on the USF goal.

Both goalkeepers, Carlos Ferrer Coto (JR/La Fresneda, Spain) of USF and Holy Cross' Tomlinson made big stops at key times during the match to keep the contest scoreless. Tomlinson stopped all three USF shots on goal in the first overtime while Ferrer Coto saved the lone shot by either team in the second overtime frame.

Ferrer Coto (7-3-3) concluded the day with 10 saves in 110 minutes of action while Tomlinson registered 14 saves in also playing the entire match between the posts.

Mason Messina along with midfielder Stefan Jakovljevic (JR/Bregenz, Austria) each generated three shots. Luis Correa-Cabral and Daniely Lynch compiled four total shots for Holy Cross. The four Correa-Cabral shots would all be on the USF goal.

USF posted a 9-5 advantage in corner kicks and committed 12 fouls while Holy Cross was assessed 14 infractions.

The University of St. Francis women's golf team had four individuals place among the top 50 overall as the Saints closed out their fall season by taking eighth place at this weekend's (Oct. 12-13) TPC Deere Run Collegiate Invitational, which was hosted by William Penn (Iowa) at the par 72, 5,840-yard TPC Deere Run Country Club course.

USF shot a first-round 411 total on Saturday (Oct. 12) and then sliced 21 strokes off in Sunday's (Oct. 13) final round to register a 390 score and concluded the tournament with an 801 team score in the 36-hole event. Host William Penn was crowned tourney champions with a 701 team stroke total in the 12-team field.

Rounding out the scoring for the Saints was Hannah Mastandrea (JR/New Lenox, Ill.), who netted a two-round 215 total (+71) for a 52nd-place tie. Mastandrea shot a 109 first-round score and followed in final-round competition by racking up a 106 tally.