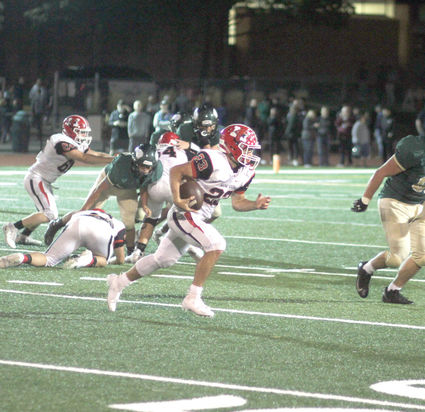 After dominating the Central Suburban League's North Division for years, Glenbrook North was reassigned to the CSL South for 2019.

Welcome to the CSL South.

In the now 18-year tenure of coach, Dave Inserra, the Hawks have lost only once in the CSL South - winning 16 CSL South championships with an 86-1 league record.

The Hawks entered Friday's game, with a 15-game conference winning-streak.

Returning from injury for the first time in four weeks, Johnny Palumbo's (six carries, 30 yards, 2TDs) two rushing touchdowns still gave the Hawks a 13-10 lead at the half.

"It was awesome to be back on the field after four weeks," Palumbo said. "We had a tough first half and it felt good to score our two first half touchdowns. I just want to continue to run over our opposition."

Hawks sophomore running back Mike Sajenko came out of the halftime locker room on a mission.

The Hawks took the second half kickoff and went 64 yards in eight plays to open up a 20-10 lead.

Sajenko rushed for 48 of the 64 yards on the scoring drive, culminating the drive with a 10-yard touchdown run.

"We played probably our worst first half of the season," Sajenko said. "The blocks were there for me and I ran hard and we played well in the second half to get the victory."

With 2:34 remaining in the third quarter Glenbrook North senior running back Mike Ciss (20 carries,102 yards, six catches, 58 yards) was separated from the football by the entire Hawk defense.

Skoronski scooped up the loose football and streaked 44 yards down the sideline for six points and a 26-10 Maine South lead.

"It was kind of a blur. I just remember running with the football and going into the end zone," Skoronski said. "I had never touched the football from scrimmage in all my years of playing here at Maine South. It was awesome."

With 8:34 left in the game, Lazik crashed in from two yards out and then later in the quarter, he hauled in a 34-yard scoring pass from Hawk back-up quarterback Justin Marques (2-for-2, 65 yards, TD).

The leader of the Hawk defense, senior strong safety Ryan Kilburg, had one of four interceptions for the Hawk defense. Sean Hayes, Emanuel Spandiary and Mike Pagliario, joined the pick party in Northbrook.

"Our secondary really played well tonight," Kilburg said. "We knew they were going to throw the ball all over the field and we were ready for them. We were especially happy for Pags (Mike Pagliaro) getting his interception in the fourth quarter."

"We talked about mental toughness at halftime," Inserra said. "We did not play well in the first half. Maybe a little letdown from the big homecoming win last week over Evanston.

"Mike Sajenko, runs hard and it was great to have Johnny Palumbo back. Glenbrook North really did a good job against our passing attack. Pete's scoop and score was huge for us. I can't say enough about Pete, for his character on and off the field. He is a great kid."