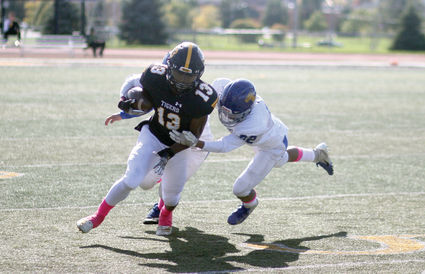 This year was a little different.

"Well [Central] is obviously in our district and after last year it did feel good to get this one," said West coach Bill Lech. "We came out in the second half, not really sure how we got there but I'll take it."

Not knowing how each team got there might be an understatement as the final score was 24-0, but West only lead 2-0 at the half.

A high snap over the head of senior quarterback Jaylin Berry that went out of the end zone at the Steelmen one-yard line gave the Tigers an early 2-0 lead.

With neither defense budging, the Tigers went into the second quarter with a 2-0 lead.

A fumble from junior running back Trent Howland (17 rushes, 128 yards) gave the Steelmen a chance to score off of a costly turnover, but a blocked punt negated that chance.

In the second half, the Tigers looked like a completely different team.

On the Steelmen one-yard line, a group of Tigers drove senior running back Jayden Perez back into the end zone for a safety, which made the score 4-0 Tigers.

The Tigers, on the next drive, got behind Howland who had a 16-yard rushing touchdown to put the Tigers up 11-0 at the 6:54 mark in the third quarter.

"I just read the hole and it got cluttered so I decided to bounce it outside," Howland said. "It was a great block so I just cut it up field broke a tackle and scored." 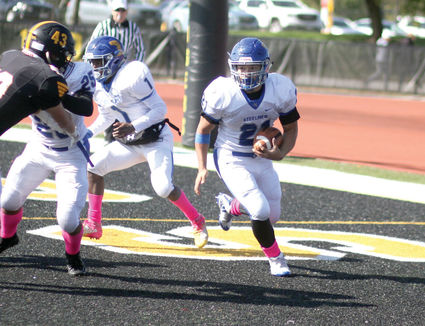 The Steelmen fall to the Tigers 24-0 on Saturday afternoon.

Because of the wind gusts, the Tigers had great field position on their next drive from a short Steelmen punt, and a two-yard rushing touchdown gave Howland his second score of the day that put the Tigers in a commanding 18-0 lead.

In the final quarter of play, the Tigers defense decided to join the party.

A Perez fumble that was picked up and scored on a 27-yard return by senior cornerback Kinsyn Shelby, put the game out of reach at 24-0.

"The message at halftime was to make sure that we're sustaining and engaging in our blocks because we were getting beat across our face," Lech said. "We talked about the importance of staying on and finishing and that's just what we did in the second half."