While providing a demo and explanation techniques to create Halloween makeup effects and give tips that anyone can use to create a great Halloween look for themselves, Richards said that there is a lot of work that goes into prepping actors and actresses to provide a scare.

"Fright Fest is really popular especially among a lot of teens and families who really just like the haunt culture," Richards said. "There's a lot of time and energy to get our actors and actresses ready so they can do their jobs properly."

In order to properly produce the right affects for the actors and actresses, each makeup artist has to work quickly.

With more than 500 scare actors and actresses and just 20 make-up artists, each makeup artist is only allotted seven minutes to work on each performer.

"We have about a two-hour time frame in order to get everybody on the street and ready to go," Richards said.

Richards has worked in the industry for six years and has been at Fright Fest the past three seasons. She said growing up being a creative mind has helped her the career path she has decided to choose.

"I was a really into arts and crafts as a kid and really wanted to do something in my career path that reflected that," Richards said. "I started off as self-taught and then I went back to school to become makeup certified and now I actually teach makeup." 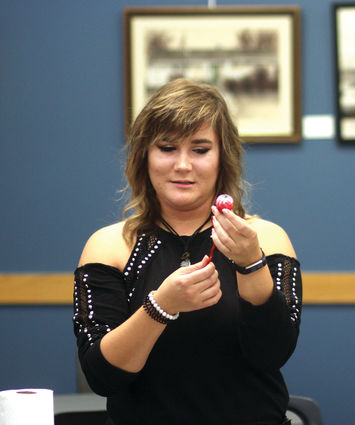 Brianna Richard displays fun and spooky Halloween makeup to those in attendance.

Fright Fest, which is only held at Six Flags theme parks in the United States, Canada and Mexico, is based on haunted attractions, themed areas named Scare Zones and live entertainment.

Richards, said she wanted to present for the audience at the Woodridge Library to not only discuss what she does for a living, but to show people how to create prosthetics on their own for Halloween enjoyment.

"Showing people how to apply makeup and prosthetics you can buy at the store and how to make yourself into any kind of character that you want to be for Halloween is something that I enjoy doing and want people to take away from this session," Richards said. "I think people are so interested in it because it really gets you into the hype for the Halloween season. Those who also like the scary movies and like to see the behind the scenes action which I also like is another reason why I think this it's popular."