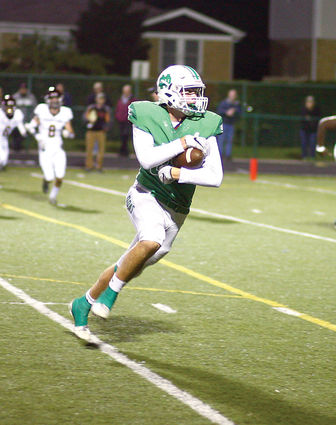 Notre Dame remained undefeated with a win over Montini Catholic.

It is easy to look at the success of Notre Dame football and look in the offensive backfield at junior quarterback Anthony Sales and senior running back Julian Schurr.

While the talented offense is a key component to the success of the Dons, the defense has been stout this year.

Led by senior Anthony Ranallo, the Notre Dame defense has allowed an average of 8.2 points per game this season and let up less than that last week in a 28-7 win over Montini Catholic.

Ranallo posted nine tackles for a defense that held Montini to less than 70 yards rushing for the game.

"Anthony is our leader since January and when Anthony says something, things get done. You gotta have a guy like that, whether it's in the locker room, the weight room or on the field. The kids believe in him," said Notre Dame coach Mike Hennessey. "The defense played great in the game and they have played great throughout the season. We have fast, tough kids and we are playing really good, really smart football. Coach (Dan) DeFranza devises a tremendous game plan and the kids believe in it and execute it."

The play of the defense has even impressed Sayles, who not only has a sideline view during games, but is challenged by them in practice.

"I am out of words for our defense, they do it time and time again. Coach DeFranza is a great guy and he always has those guys ready," Sayles said.

Sayles, a starter last year as a sophomore has grown into a player that has led the Notre Dame offense this season. Coupled with Schurr, the tandem make every snap a must watch.

"I have to thank coach Hennessey for bringing me up last year and making me the starter, it gave me the experience, confidence and poise for these kind of moments," Sayles said.

Sayles ended the contest against Montini completing 12 of 23 passes for 120 yards, while Schurr posted 104 yards on 24 carries and three touchdowns.

The win came in the first-ever match-up between Notre Dame and Montini, as the teams faced off in the second game of the newly formed Chicago Catholic League/East Suburban Catholic Conference Green Division match-up.

"We had this game eyed on the calendar since the beginning and it is the first time we have played them in school history and we wanted to leave them with a good impression," Sayles said.

Notre Dame is the lone ESCC team in the Green Division that features Montini, Providence and St. Rita and 17 combined state championships.

The Dons lead the league to this point, holding a 2-0 mark in conference and 6-0 record overall.

"We saw the CCL/ESCC merger and we loved the opportunity to play all of these great schools – we have never played Montini in school history and we made a statement," Ranallo said. "We just wish we played Loyola."

If Notre Dame keeps playing this way, a match-up with Loyola could happen in the IHSA Class 8A state playoffs.