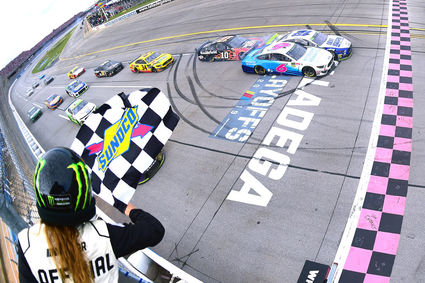 Ryan Blaney, driver of the #12 Dent Wizard Ford, takes the checkered flag ahead of Ryan Newman, driver of the #6 Wyndham Rewards Ford, to win the Monster Energy NASCAR Cup Series 1000Bulbs.com 500 at Talladega Superspeedway on October 14, 2019 in Talladega, Alabama.

By .007 seconds - the sixth-closest finish in series history - Blaney edged Ryan Newman to win Monday's rain-delayed 1000Bulbs.com 500 at Talladega Superspeedway, which took a big bite out of most other playoff contenders and set up a scramble for the six remaining spots in the Round of 8 next Sunday at Kansas Speedway.

With his first victory of the season, his first at Talladega and the third of his career, Blaney secured his berth in the next round, joining Dover winner Kyle Larson, who crashed out of Monday's race in 39th place.

"Yeah, it was an amazing effort the last two days, to be honest with you," said Blaney, who spun coming to pit road during Stage 1, which was completed on Sunday just before the rain arrived and forced the rest of the race to be run on Monday.

"We spun out early yesterday and missed some big ones today. We were able to weave our way through. I can't thank Aric Almirola enough for helping me out there at the end."

Blaney led the field to green with two laps left, after a caution for an 11-car pileup on the backstretch caused the eighth caution of the afternoon. On the final lap, Blaney surrendered the lead to Newman, who got a strong push to the front from eventual third-place finisher Denny Hamlin.

Coming to the checkered flag, Blaney side-drafted Hamlin and uncoupled the two cars, and with help from fellow Ford driver Aric Almirola, he beat Newman to the finish line by roughly one foot.

"That big push that Newman and the 11 (Denny Hamlin) got, I knew I wasn't going to be able to block it. They were coming so fast and they wanted to split me. I wanted to stay to the bottom and kind of pulled the 11 off the 6 and then had a big enough run to get to the 6.

"We kind of hit above the line (at the apron) and that pushed me below the line. That is a big judgment call. You never know. I definitely wasn't going to go below the line before we made contact (because of the possibility of a penalty). I can't say enough about this Dent Wizard team. It has been super fun the last couple of days. We're moving on! This is super cool."

Getting separated from Hamlin in the last quarter-mile likely cost Newman a chance for his first victory with Roush Fenway Racing.

"We just came up that little bit short," Newman said. "I don't know what else to say. I could have pinched him some more. I probably could have taken the air. You can go back and bench-race that three weeks from now. It was good racing to the end."

None of the 12 playoff drivers escaped the race without incident. The massive wreck on the backstretch on Lap 182 of 188 destroyed the winning chances of Kyle Busch, Kevin Harvick and Brad Keselowski.

Kurt Busch was pushing his brother Kyle in the middle of a three-wide pack when the Ford of Ricky Stenhouse Jr. moved up the track toward Kyle Busch's Toyota. Almost simultaneously, Kyle's No. 18 Camry turned sideways off the nose of Kurt's Chevrolet and slammed into the No. 62 Chevrolet of Brendan Gaughan, who was leading the outside lane. 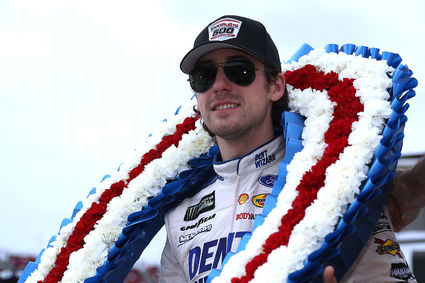 Playoff driver Alex Bowman was gone on Lap 107, when his attempted block of Joey Logano went awry and ignited a 10-car incident that crippled the No. 19 Toyota of Martin Truex Jr. and damaged the cars of Harvick, Hamlin, Chase Elliott and Brad Keselowski.

Pole winner William Byron saw his playoff hopes take a hit when he turned to the right off Kurt Busch's front bumper and drove Logano's No. 22 Ford into the wall on Lap 162. That occurred after a blown tire, and a spin onto the apron waylaid Clint Bowyer on Lap 153.

Elliott recovered to finish eighth, and Logano secured an 11th-place result, but when the smoke cleared from the multicar accidents, Bowman, Elliott, Bowyer and Byron found themselves facing probable must-win scenarios at Kansas.