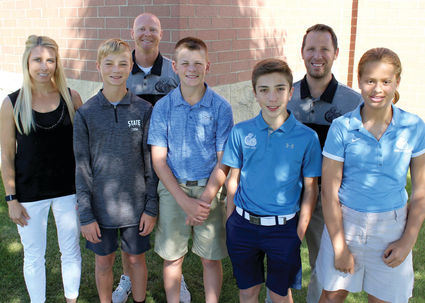 Three members of the Troy Boys' Golf Team and one member of the Troy Girls' Golf Team competed at the IESA Golf State Finals held at the Kellogg Golf Course in Peoria this season, all placing well in the competition.

"We had our highest number ever try out for the Troy Golf Team this year," DeGroot said. "It shows the excitement for golf is growing in the community. We are definitely looking forward to where we can take the program in the next few years."

DeGroot described this year's eighth grade class, in particular, as "dynamite," and said he was sorry to be losing them.

"It's a special group we had," he added.

"Each of our three eighth grade male athletes have competed at the state level on multiple occasions," Kaciuba said. "This year, each one finished their 18-hole round shooting in the 80s. This was Nina's first time down at state, having only played the sport for two years. In her best round, she shot her personal best."

Kaciuba added that throughout the season, the team continually exhibited good sportsmanship on the course and at practice.

Troy Director of Athletics Meagan DeGroot said that although the team will miss the eighth graders, who have been good leaders, she is looking forward to the next classes coming in and moving the team forward.

"The Troy Golf Team has been a big community sport over the years," she said.  "We have a lot of parents who have helped us, and we also greatly appreciate our partners at the Inwood Golf Course."