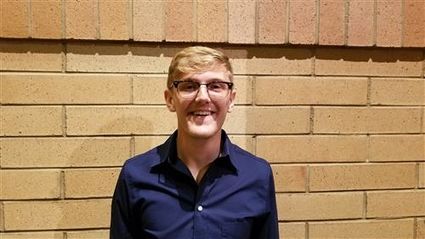 A future bioengineering student, who has always been interested in Stem Cell Research, is currently taking AP Chemistry and AP Physics as a couple of his high school courses.

The standout student, who was recently named a 2020 National Merit Scholarship semifinalist, has always valued his education, and the success he had on his PSAT test proved that.

"To my understanding they cut off the first 50,000 scores and they go not just off of the PSAT score, but they score your responses to the questions as well," Boots said. "It gives you your National Merit qualifying index card."

Of the 50,000 scores, names get broken down to the next highest 16,000 scores, which then separates even more students.

After being named one of the 16,000 students nationwide who made the cut, Boots said there is still work to be done.

An application still has to be filled out and submitted where another 1,000 students nationwide will get cut off, leaving just 15,000 finalists across the country.

A part of that application process is detailing school performance, leadership skills, community activities, plus honors and awards received.

"That application process also involves a written part from the vice principal saying why they think I would be good for this scholarship and why I'm basically worthy of it," Boots said. "I'm crossing my fingers."

The semifinalists who are still remaining compete for 7,600 National Merit Scholarships worth more than $31 million, and those who do qualify, scholarships are worth $2,500.

Getting this far in the process Boots said is fulfilling, but with only 50 percent of the students ending up with a college scholarship, Boots said he can't do much in the meantime besides wait and hope for the best.

"Well when I first found out I was in English class and my phone was blowing up so after I went into the hallway and I couldn't really scream and shout because people were in the hallway, so I just did in my head," Boots said. "I know there's still the application process and it will be awhile until I found out if I qualify for that next round, but I'm just really hoping I'm chosen in April."