North rally falls short in loss to Oswego, Minooka next 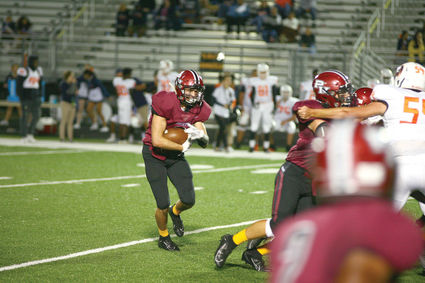 The touchdown pass was Smith's 14th on the season.

Ten of those touchdown strikes have been hauled in by Tillman.

First-year Tiger head coach Anthony Imbordino decided to go for the two-point conversion and the win.

"There was no doubt about the decision to go for the win," Imordino said.

Plainfield North senior wide receiver Marcellus Moore, a six-time IHSA track and field champion, was the player to go to for the victory.

From the three yard line, a razzle-dazzle reverse, half-back option pass was overthrown to Moore, in the end zone.

A Plainfield North onside-kick, was recovered by the Panthers and ran out the clock.

After torrential thunderstorms hit the area on Friday night, the game was rescheduled for Saturday.

Entering Saturday's contest, both school's were undefeated and Oswego was ranked No. 8 in the Associated Press week 5 Illinois Football State Rankings.

Late in the second quarter of a scoreless first half, the Tigers rolled the dice and went for a fourth and one, at their own 40.

Senior Josh Stiiffend picked up the crucial first down.

With 4:23 left, the Tigers faced a fourth and four at midfield and rolled the dice - again.

Leading rusher Nate Simpson (23 carries, 151 yards, touchdown), came up just short and Oswego took over the ball at their 46.

The Panthers marched 54-yards on six plays and scored the first touchdown of the first half on senior quarterback Cole Pradel's one yard-plunge.

The Panthers took the 7-0 lead into the halftime locker room.

It took only 91 seconds for North to cut the lead in half at 14-7 on a 1-yard Simpson touchdown.

"I owe all of my success to my offensive line, "Simpson said. "We battled back and just fell just short today. We will work hard on Monday and get ready for Minooka

Oswego drove to the Tiger 30 and faced a fourth and four with two minutes left.

On a fourth and 10 at the 32, Smith connected with senior Cooper Bridges (three catches 48 yards) for 12 yards and a first down.

A 15-yard personal foul penalty on Oswego and two more Smith-to-Bridges pass connections put the ball on the Panther 20.

On defense, a Tiger hoopster, junior defensive back, Carlos Conley, exhibited his hops and picked off a pair of Panther passes.

"I played solid defense on the Oswego receivers and took advantage, of the opportunity to pick up the interceptions," Conley said. "Next week is our homecoming game ad we will be ready for Minooka.

"I am proud of the way we battled back today," Imbordino said. "It was a tremendous catch, in the end zone by Jaylon (Tillman) and a basketball player Carlos Conley, played outstanding for us, with the two interceptions.