Minooka moves to 5-0 on the season, faces Plainfield North next week 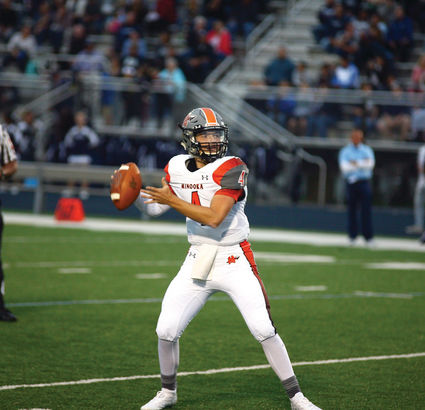 Seth Lehr returned from injury to help Minooka move to 5-0 on the season.

Mother Nature, as she had done all spring and summer, struck again with her favorite weapon - lightning and torrential rain.

Thus, on Saturday night, the undefeated guests from Minooka and the hosts from Oswego East, began SPC West play.

Minooka entered the contest ranked No. 7 in the Associated Press week 5 state football rankings, while Oswego East checked in at No. 15.

It didn't take long for the Indians to get on the board.

"I was playing up on the receiver and was fortunate to be able to get the big interception," Ramirez said. "It was important for us to get the early lead and the momentum. It felt great to get the pick-six."

With the return of senior quarterback Seth Lehr and an outstanding effort from the Indian defense, Minooka rolled to the 24-7 SPC West victory to improve to 5-0.

After a very shake start, Lehr finished a quality night completing 10 of his 22 passes for 111 yards and a touchdown.

Lehr added 33 yards rushing on 10 carries and a touchdown.

"It felt great to be back but I was a little rusty in the first half," Lehr said. "I missed a wide-open Noah Ellens, for a touchdown. Our defense was outstanding tonight and this was a great victory for us to improve to 5-0."

With 1:36 left in the half, on a perfect pass, Lehr hit senior Trent Hudak in stride for a 36-yard scoring strike.

After Indian junior place-kicker Mason Spivey's second PAT, the Indians led 14-7 at the half.

"This was a great win for us to go to 5-0," Gonzales said. "Our goal is to go 9-0 and win the SPC West. It was great to have Seth return but we really are all, very happy, with Josh Davis' play, replacing Seth."

Lehr concluded the scoring with a three-yard touchdown run with 6:41 left in the game.

After leading the Indian defense, from his linebacker spot, Indian senior fullback Jake Kellams (four carries, 25 yards) ran over and ran out the clock on the Wolves late in the fourth quarter.

"I love playing on defense but I really enjoy the opportunity to carry the football, " Kellams said. "I love to run over people. We all played great on defense."

"We played well again tonight but once again, there is always room for improvement," Shipla said.

Up next for the road warriors is a third consecutive road game at Plainfield North (4-1, 0-1) on Friday night.

It will be homecoming on the north side of Plainfield.

"Well, we will finally, conclude our road trip next week at Plainfield North," Minooka coach John Belskis said. "Ernesto really got us off to a great start, with his pick six, in the first quarter. Seth, was a little rusty but there isn't any quarterback in the entire area, that I would rather have leading my team, than Seth.

"Our defense played very well against a very good Oswego East team. Our 5-0 record is right where we thought we would be, after five games. We're going to enjoy this victory and then get ready for Plainfield North on Monday."