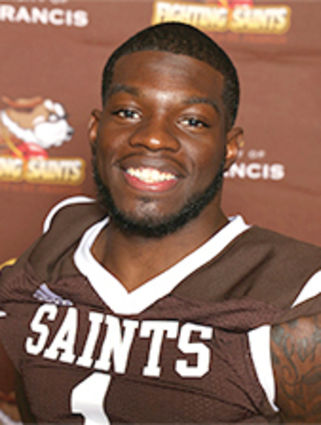 Dwayne Milton (SR/Machesney Park, Ill.) broke two school records and tied two others and the University of St. Francis offense tied one other mark in closing Mid-States Football Association crossover play with a 55-27 victory over Lawrence Tech University on Saturday.

Milton broke his own mark for yards rushing in a game with his 256 yards on 24 carries Saturday. The previous record was 249 yards set last year versus Lindenwood University-Belleville.

His 10.7 yards per carry average also established a new high-water mark in that category, breaking the old record of 10.2 yards per carry by DeJuane Jones against Michigan Technological University back in 1996.

Besides those marks, Milton accounted for five of USF's eight touchdowns, with all five coming on the ground to tie a 20-year mark initially set by Victor Pierzchalski back in 1989 against St. Joseph's College (Ind.).

The 30 points scored by both Milton on Saturday and by Pierzchalski in 1989 also represent the top mark in that category.

USF's offensive unit also got in on the record-editing act with its seven rushing touchdowns on the day, tying the mark first set in 1992 versus Kentucky State University. It all added up to a season-best 495 total yards of offense - 9.5 yards per play - and touchdowns on 8 of 11 offensive series.

The three also produced at least one run of 43 yards each.

Milton did it twice and both times resulted in one-play touchdown drives.

The first time came after Lawrence Tech (1-3) had wiped out an early 14-0 Saint advantage following their first two possessions.

The 14-all tie lasted all of 10 seconds as that was the amount of time required for Milton to cover 65 yards and put the Saints back up 21-14 with 9:46 remaining in the second quarter.

Milton then started a string of three straight scores in the second half after Lawrence Tech had gotten as close as 34-27 on a 12-play, 85-yard drive to open the third quarter and had driven into USF territory on its second possession.

Following a pooch punt by Blue Devils quarterback Tyler Kulka down to the St. Francis 17-yard line, Milton went 83 yards for his fourth touchdown of the day to put the Saints up 41-27.

He added his fifth score on the Saints' next possession, an 8-play, 85-yard march that came just after Lawrence Tech was thwarted in the end zone on a fourth-down pass breakup by Jonathan Pullen (FR/Joliet, Ill.).

Johnson and Keagan James (JR/Sheridan, Mich.) also got in on the scoring act with the former's touchdown coming from one yard out to put the Saints up 14-0 early. James' first score as a Saint pushed USF's lead back up to a two-touchdown margin (28-14) midway through the second quarter on a 10-yard pass from Dedmond.

Dedmond and Jamal Salaam (JR/Hanford, Calif.) rotated on each offensive possession at quarterback with Dedmond getting the start.

Besides his rushing numbers, he completed 3-of-4 passes for 21 yards, including the touchdown to James.

Salaam was 5-for-7 for 53 yards through the air and had one carry for four yards.

Despite yielding the 27 points, the Saints did have some standout performances defensively, including finishing with 11 tackles for loss and one sack as a team.

Mike Gruben (SR/Joliet, Ill.)led the way with 10 tackles - 2.5 of which went for loss - and a fumble recovery that set up Johnson's touchdown.

His score and Milton's opening touchdown marked the first points of the season for the Saints in the opening quarter.

Entering the day, they had been outscored 71-0 after the first 15 minutes.

They also ended a 52-0 drought in the third quarter with Milton's 83-yard run.

Besides his touchdown-saving and drive-stopping pass breakup early in the fourth quarter, Pullen recorded one other knockdown to go along with his eight tackles, which was second best on the team.

He finished the day credited with five tackles.

Both were set up by kickoff returns of 62 and 54 yards.

Mekai Otero led the Blue Devil ground game with 70 yards on 19 carries with one touchdown (7 yards).

The contest ended a string of four road games among its first five playing dates for USF, which gained a split of the four decisions.

Kickoff is set for 1 pm at ATI Field at Joliet Memorial Stadium.

The nationally fifth-ranked University of St. Francis women's cross country team ran up against some formidable competition on a wet and muddy course at Sept. 28 42nd Annual Loyola Lakefront Invitational as the Saints captured 11th-place honors.

USF scored 332 points in the 18-team 5K Sean Earl Collegiate Invitational Maroon Race, which was held at Montrose Park. The Saints finished one point in front of 12th-place Southern Illinois-Edwardsville (333 pts.) and 60 points in back of 10th-place DePaul (272 pts.), a pair of NCAA Division I teams. Northern Illinois was crowned meet champion with 60 points and host Loyola placed second by tallying 62 points.

Individually for USF, Sabrina Baftiri (JR/Morris, Ill.) was the Saints' top finisher with a 42nd placing as she ran a personal season-best 18:56.7 time.

Taylor Conroy (SR/Marengo, Ill.) was the Saints' next highest finisher by capturing 58th-place honors as a result of clocking a time of 19:07.4 while Laisha Corona (JR/Lockport, Ill.) produced a 68th-place 19:14.7 time. Veronica Navarrete (JR/Berwyn, Ill.) would end up posting a 19:26.6 time which afforded her 89th place.

Tara Janney (FR/Brookfield, Ill.) along with Annet Juarez (FR/Joliet, Ill.) also represented the Brown and Gold at the meet.