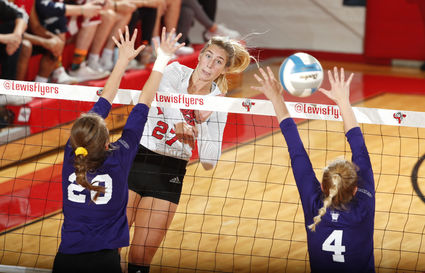 The sixth ranked Lewis women's volleyball team extended its winning streak to six matches with a sweep of Quincy on Saturday afternoon at Neil Carey Arena.

Lewis used a 7-2 run midway through the opening set to break an 11-all tie to take a five-point lead on a kill from Ava Venema (Westmont, Ill./Timothy Christian).

The Flyers stretched the lead to 23-16 after an error from Emily Rehagen.

Quincy refused to go quietly scoring three straight points to cut Lewis' lead to 23-19 after a kill from Sarah Brown.

The Flyers scored the final two points to take the opener 25-19. Lewis hit only .195 in the first stanza but held the Hawks to a negative .024 attack percentage.

The Flyers led wire-to-wire in the middle frame building a 13-point lead in the stanza on its way to a 25-12 win. Alexandra Preuss (Elmhurst, Ill./York) and Colleen Wilhelm (Euclid, Ohio/Lake Catholic) led Lewis with four kills apiece in the set.

The Flyers hit .467 in the frame with 14 kills against zero errors in 30 attempts.

The third set saw eight ties and two lead changes. Lewis gained some separation thanks to a 10-2 run that broke a tie at 10.

Preuss had three aces in the run while Megan Schlechte (Strasburg, Ill./Stewardson-Strasburg) added a pair of kills.

The Flyers went onto win the frame 25-15 to complete the sweep.

• The Great Lakes Valley Conference announced Sept. 30 that Lewis University Venema and Katarzynski have been selected as the Baden GLVC Women's Volleyball Offensive and Defensive Players of the Week, respectively, for the period ending September 29.

Both were instrumental in helping Lewis to victories over Truman (Sept. 27) and Quincy (Sept. 28) last week.

Her most impressive performance was a 13 kill, five total block outing while hitting .619 (13-0-21) in a sweep over Truman State.

Katarzynski averaged 6.83 digs-per-set and finished with 41 digs in six sets of action. She matched her season-high with 21 digs in the win over the Bulldogs last Friday.

Bertram Gjelfort put S&T in front on their first shot of the game in the 19th minute off an assist from Jason Jorgensen. The Miners added to their lead less than 10 minutes later when Tim Schreffl scored into the upper right corner with an assist from Sean Perryman.

Lewis came right back in the 29th minute with Konrad Malinowski (Arlington Heights, Ill./Wheeling) finding the back of the net with a goal into the lower left corner.

The score remained that way the remainder of the half despite the Flyers outshooting the Miners 7-2.

Lewis had several opportunities for the equalizer but were denied until the 76th minute when Jayson Iniguez (Crest Hill, Ill./Lockport Township) scored with an assist from Dominic Baumann.

The Flyers had a pair of chances to win the game in the final five minutes.

The first came in the 86th minute but Matthew Beaulieu's (South Elgin, Ill./St. Charles North) attempt was saved by Nick Posey. Jimmy Mwanga (Dublin, Ireland/CBS Lucan) had a chance in the 89th minute but Posey made the save once again.

S&T had two chances to win the game early in the first overtime period.

Paal Benum missed a shot wide in the 91st minute and then Gjelfort was denied by C.J. Couper (Rockford, Ill./Boylan Catholic) in the 93rd minute.

Lewis had three cracks at the game-winner in the final 10 minutes.

Oluwatuyi had another chance in the final minute that was saved by Posey.

Lewis returns home for the first of four beginning on Friday (Oct. 4) taking on Truman State at 7:30 p.m.