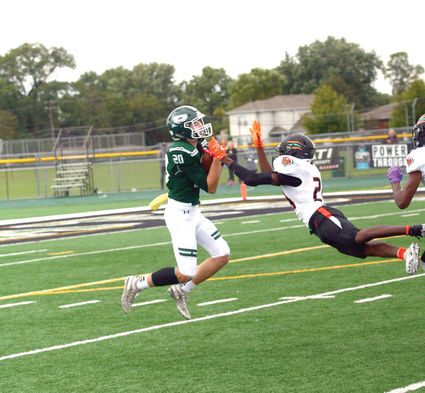 lthough both Plainfield Central and Plainfield East have played Southwest Prairie Conference opponents to open the season, under the new configuration of the league, when East visited Central on Homecoming 2019, both teams were playing the openers for the new SPC West.

"I had kind of assumed the kids understood the whole conference thing, but after last week when I told them we were 0-0 and starting conference, they were puzzled," East coach Brad Kunz said. "We had to have that talk that those first four games were not in conference - last year they were. This is a new season and today we came out and felt that freshness after playing three of the top five teams in the state."

The Bengals scored early, on a safety and touchdown in the opening three minutes of the game, then added two more scores - one an interception return for a score less than 10 seconds into the second quarter, leading to a 22-0 lead.

Both teams added second half scores and East rolled to a 36-10 win.

"It feels good to kind of get back in the flow of things," Kunz said. "Our guys have been working on trying to do the little things now, and today we were able to do some good things. This was probably the first time that we really switched things up offensively a little bit. Our guys picked up on it and did well with it."

After the safety on a bad snap on a punt, Dale Dambek plunged in from 1-yard out with 9:32 remaining in the opening quarter.

Then, just as the second quarter opened, Angelo Mondia intercepted a screen pass in the flat and returned it 28 yards to a score.

"It was really just another advancement for our team - keeping our spirits up," Mondia said. "Making that play helped us to finish the half strong and helped our team how we played the rest of the game, in letting up only 10 points. That was right there for me. With the tight end on that side, it was a read."

The duo hooked up again later to close out the scoring.

"My coach always talks about yards after catch, YAC, and we really prioritize that," Tonarelli said. "Last year I was on the sideline and didn't get many plays, but this year is a completely different thing. We have to be playmakers. We all I put work in and the outcome has been awesome."

Despite the numbers on the scoreboard, Plainfield Central competed, it just gave up too many big plays.

"It is hard for me to frame it to the kids in that way. They are beat up and are frustrated and I can see that," Wildcats coach Jon Pereiro said. "They also realize that they're giving everything that they've got, and I'm very proud of them for that. But, that is exactly how I framed it for them already and will be. Our defense played great adn had three turnovers, they just scored on some big plays and they have playmakers. We just have some growing pains with kids in new positions and injuries. We felt we are moving in the right way."