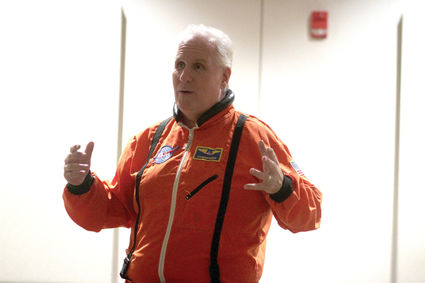 With 2019 being the 50-year anniversary of the first moon landing, Terry Lynch came to the Joliet Library to give his best Neil Armstrong impersonation. "I'm portraying Neil because of the 50th anniversary of the moon landing itself," Lynch said. "What I try and present in it is actually just how impossible it was to accomplish that back then."

In what was known as being less than a 50 percent survival rate while trying to accomplish something that has never been done, Lynch said for that time this was astonishing.

Armstrong, an astronaut, aeronautical engineer, naval aviator, test pilot and university professor, did not always have going to space on his mind.

A veteran, who saw action in the Korean War, decided eventually that he wanted to go to Purdue University, so he became a test pilot at the National Advisory Committee for Aeronautics (NACA). Armstrong participated in the U.S. Air Force's Man in Space Soonest and X-20 Dyna-Soar human spaceflight programs before landing on the Moon was ever a thought.

"Now, we think about space travel and how easy it is to just get up and go but back then it was seemingly impossible," Lynch said. "People don't really recognize how difficult it was back then to do something like this."

Armstrong made his first spaceflight as command pilot of Gemini 8 in March 1966, becoming NASA's first civilian astronaut to fly in space.

Although Armstrong rose significantly up the ranks taking on more responsibilities, it wasn't all a smooth transition for the hero.

During training for Armstrong's second and last spaceflight as commander of Apollo 11, he had to eject from the Lunar Landing Research Vehicle moments before a crash.

"In all the missions they ever had, it was only the second time they got that close to the surface on the moon," Lynch said. "They don't realize how many times they almost died on that mission."

On the date that will always be remembered in American history, Armstrong and Apollo 11 Lunar Module pilot Buzz Aldrin became the first people to land on the Moon, and the next day they spent two and a half hours outside the spacecraft while Michael Collins remained in lunar orbit in the mission's command module.

Along with Collins and Aldrin, Armstrong was awarded the Presidential Medal of Freedom by President Richard Nixon.

After he resigned from NASA in 1971, Armstrong taught in the Department of Aerospace Engineering at the University of Cincinnati until 1979.

While Armstrong made himself clear as one of the most famous pioneers in Amercian history, Lynch said he never quite acted like it.

Not allowing someone to write a biography on Armstrong's life until 30 years and keeping to himself were a couple of things that Lynch said Armstrong was most known for in his personal life.

"We was a very team oriented guy," Lynch said. "Even the other people in the crew didn't know if he was mad, happy or sad, he always just stuck to himself."

Although he was reportedly recovering well, he developed complications in the hospital and died on August 25, in Cincinnati, Ohio, at the age of 82.

Though its been seven years since his death, Lynch said no matter if he never recognized his greatness he achieved, he will always go down as an America hero.

"I really enjoy researching and finding out new things about Armstrong as a human being," Lynch said. "What he did and accomplished was amazing, so I enjoy bringing him to life instead of just reading about it in a book."