Activities for all ages takes over at Harvest Fest, kicking off fall season 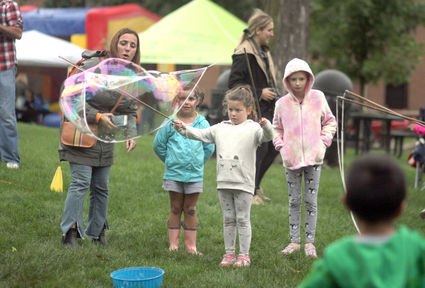 In Downers Grove, the Harvest Fest has been a hit the last three years.

In it's fourth year being held at Fishel Park, not much changed.

"Every year we have changed it up a bit, but not too much because of the past success we have had with it," said Downers Grove Park District Director of Marketing and Community Dawn Hartman.

In this being the first year that the Downers Grove five-and-eight mile races were not part of the fest, other activities for kids and adults will be provided.

"We actually thought even though we didn't have the [Downers Grove five and eight miler] it made for a more concentrated event at the fest," Hartman said.

On a rainy and ominous 55-degree weather day, a sufficient crowd showed up to the fest that Hartman said is very weather-driven.

"Well it's very weather dependent and if we had sun today we would have had about 2,000 or 3,000 people that would have showed up," Hartman said. "Even though it's a cloudy day and we have seen a little smaller crowd than normal, we are still really happy people came out today and seem like they're all having a really good time."

A beer and cider tent selling eight different beverages, five different food vendors including a new vendor Emmett's Brewery and seven different sponsors all showed up to the event providing services for those in attendance.

An event that lasted from noon to 7 p.m., where it was free admission, there was also a variety of different entertainment provided.

Entertainment included DJ Coach Josh, The Suburban Cowboys played, Glowby the Bubbler helped and taught kids how to properly blow bubbles and ARRA closed out the music portion of the event.

"A lot of fun performances tonight here which I've been excited about," Hartman said. "Really looks like the not just the kids, but the adults are enjoying the fest with the different types of music and other entertainment we have provided."

A bounce house and a pumpkin decorating contest where four winners were awarded highlighted the kids' activities.

"Our goal is to provide something for every age to enjoy," Hartman said. "We have people here who are ages 50 and up who are here to listen to the music and we also have families with kids of all ages so it's really just a community event for everyone."