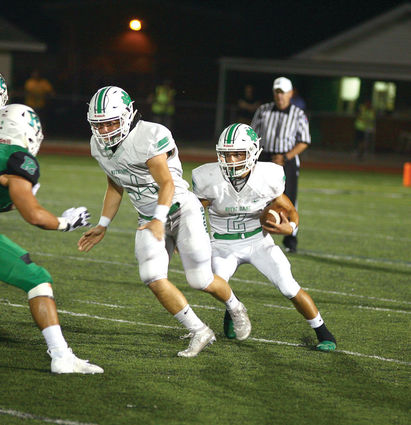 Julian Schurr rushed for a pair of touchdowns in Notre Dame's win over Providence Catholic.

Aretha Franklin sang about it, Rodney Dangerfield didn't get any and Niles Notre Dame has deserved it.

And after a 28-7 victory over Providence Catholic on Matt Senffner Field inside Bishop Kaffer Stadium in New Lenox, the Dons have earned the right to no longer be overlooked.

"We have been itching for that respect for a long time and hopefully after this one we get it because this was a huge win for us," said Notre Dame running back Julian Schurr. "This was great."

Schurr carried the ball 13 times for 134 yards and a pair of touchdowns in Notre Dame's win.

The win was the first of the season for the Dons in the newly-formed Chicago Catholic/East Suburban Catholic Green and the fourth of the season.

Notre Dame opened the season with a 49-7 rout of Geneva, then handed Grand Rapids (Michigan) Catholic Central a 21-14 loss, only the second time Grand Rapids lost at home in nearly three years.

With a return to Illinois, the Dons defeated Marist 21-14 and were still ranked No. 9 in the Class 8A AP Poll and No. 25 in the NBC Sports Chicago Top 25. It was the first time all season Notre Dame has been featured on either list.

"We had a nice year last year and losing (senior running back/defensive back) Ty (Gavin), most people questioned how we would replace him – and he is irreplaceable – he is the best player we have had at Notre Dame, but we have some guys that have really stepped up," said Notre Dame coach Mike Hennessey. "We are playing good football and we are happy with our execution – defensively, we are not making a lot of mistakes. Defensively, we are very strong and very fast and offensively, we have some athletes."

In the win over the Celtics, Providence got on the scoreboard first with five minutes, 13 seconds to play in the first quarter, however, Schurr tallied his first TD of the game from 57-yards out to tie the game.

With 4:53 remaining in the second quarter, Schurr gave Notre Dame the lead for good with a 21-yard scamper.

With 1:01 left, the Dons added on as Anthony Sayles found Brian Pritt from one-yard away to make it a three-score game.

Nick Giamarusti's 44-yard catch and run with 5:07 to play was the dagger.

On the night, Sayles finished 10 of 17 for 127 yards and the pair of touchdowns.

"We run a lot of RPO like everyone else in the world and once we spread people out, we feel confident we can go get it with Julian running the ball or Anthony keeping it, we have two great options," Hennessey said. "(Sayles) comes to play. He is a tremendous leader and the poise that he shows is remarkable and these guys truly believe in him and when you have a kid like him, you have an ace in the hole."

This is the first time since the 2013-14 season the Dons have been unbeaten this late in the year since they opened up 5-0.

Notre Dame was a Class 8A state semifinalist a season ago and is looking to better that showing this season.

"State is the dream, that is the goal and I think it is very reachable this year," Schurr said. "We are going to keep taking it to them."