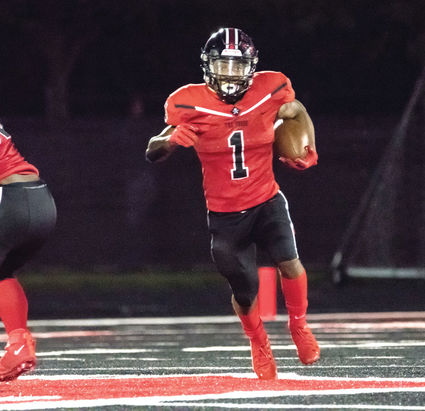 Antonio King had a 95-yard kickoff return for a touchdown against Lincoln-Way East.

Before a good crowd and WCIU-TV cameras, the Raiders and the Griffins, battled on an unseasonably hot and humid night in Bolingbrook. The top-ranked Griffins prevailed 20-10 but the Raider defense put on a show, for the home folks.

Led by junior linebacker Tyler McLaurin, the Raider defense held in check one of the state's offensive juggernauts. Two weeks ago, in a 34-17 win over Naperville Central, Lincoln-Way East senior halfback Devon Williams ran for 301 yards and three touchdowns.

On Friday night, Williams ran for just 56 yards on nine carries of which 30 yards came on Williams' first carry of the night.

Lincoln-Way East's all-everything, running back, wide receiver, kickoff and punt return specialist AJ Henning, rushed for 98 yards on 19 carries. The Michigan-bound Henning picked up 26 of his 98 yards on a third quarter, touchdown jaunt.

Henning fumbled twice and McLaurin came up with both fumble recoveries. McLaurin was all over the field making 11 tackles on the night.

"Our defense played outstanding tonight," McLaurin said. "Our defensive linemen came up with big hits. I want to give credit to our defensive backs, for controlling Lincoln-Way East's passing game. It was a tough loss but we are proud of our effort tonight and look forward to Monday, to start working toward moving forward."

With 7:40 in the first quarter, East's All-State kicker Dom Dzioban kicked a 22-yard field goal for a 3-0 Griffin lead.

After McLaurin's first Henning fumble recovery, the Raiders went on a 11-play, 39 yard scoring drive, culminating in Raider kicker, Joe Balas' 21-yard field goal, to tie the game at 3-3, with 11:10 in the first half.

McLaurin, picked up another Henning fumble at the Raider 26 with five minutes remaining until halftime.

With 7:18 in the third quarter, Henning scored and put the Griffins up 17-3. On the play, a Bolingbrook assistant coach, interfered with the line judge, on Henning's touchdown, and was accessed an unsportsmanlike conduct penalty.

After the 15-yard penalty, kicking off from the Brook 45, everyone expected Dzoiban, to kick the ball out of the end zone.

Surprisingly, Dzoiban kicked the ball high and short into the arms of Raider senior Antonio King.

King caught the ball at the Raider five yard line and 12 seconds later, King was in the end zone and the Raiders were within 17-10, with 7:04 left in the third quarter.

"I was very surprised that they kicked to me," King said. " I thought for sure they would kick it out of the end zone. I picked up some good blocks from my teammates and it felt great to race to the end zone. I want to give all the credit in the world to our defense, everyone of them, for a great game."

Dzobian added a 22-yard field goal, in the fourth quarter, to finish the game scoring.

"Our defense was outstanding tonight, " Bolingbrook coach John Ivlow said. "Our defense is our strength this year and did a great job.

"On the kickoff to King, I believe Rob (Lincoln-Way East head coach Rob Zvonar) was hoping to bury us on a fair catch, at the five-yard line. Happily for us, Antonio took it 95-yards, for our only touchdown of the night."

Sadly, the Raider offense could only muster 22 yards rushing and 56 yards passing.

"Lincoln-Way East, always has one of the state's best defenses," Ivlow added, "Every year we struggle to move the ball against them."