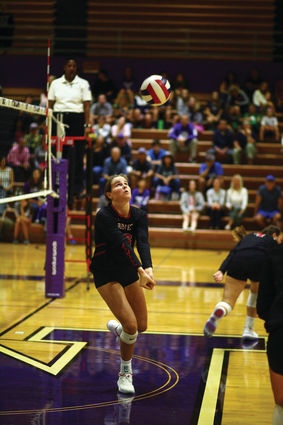 Maeve Nelligan and Benet are 11-0 on the season.

Through its first 11 games of the season, the Benet Academy volleyball team is a perfect 11-0 and it is not because of an easy schedule.

The Redwings have already defeated Class 3A and Class 4A state qualifiers in Joliet Catholic Academy and Downers Grove North, respectively.

A week ago at North, Benet won 25-21, 25-16 without setter Rachael Muisenga, but Sam Buckley stepped up and contributed 32 assists.

"It is always good to have a little adversity and throw a wrinkle in and see how everyone responds," Baker said. "There will be adversity during the year and it was good to see everyone step up and no one is making excuses."

Benet is coming off a season in which it finished third in Class 4A, the first time the program had ever competed in the third-place match, but Baker said with the difficulty of the schedule and the target that is always on the back of the program, it can not look ahead.

"We need to think about tomorrow's practice," he said "Our regional and sectional and super, those are going to be super tough. This group is pretty good about going to get it the next match and focus on the other stuff later. We know we are going to get everyone's best match and that is a good thing - if we are not ready, we will know."

While the team understands it can't look ahead, all summer, the Redwings worked to get to a point where they are good enough to surpass last year's finish.

"We remember last year and we know we want that revenge. We have the goal of state all the time and we keep putting in the work and getting better on the floor," said senior Hattie Monson. "We knew it wasn't a good feeling and after we were done with our club teams, we knew we had to get the extra work in for the Benet season."