After starting the season 0-2, Joliet Catholic has rolled off a pair of wins to even its record 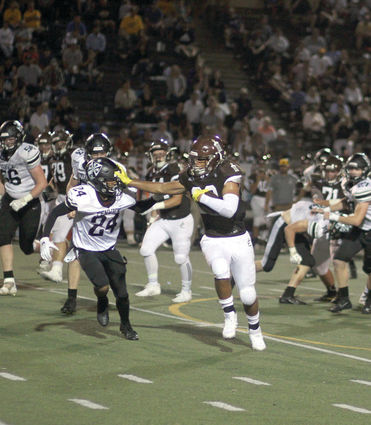 After an uncharacteristic 0-2 start to the 2019 season, Joliet Catholic Academy football has recently hit a hot streak.

In their last two games, the Hilltoppers, now 2-2, have outscored their opponents 83-47.

The interception Jaworski alluded to was a 93-yard pick six from junior cornerback Jabril Williams off of Fenwick sophomore quarterback Kaden Cobb with 7 minutes, 44 second left in the first quarter.

JCA capitalized on its first offensive possession of the game with a play-action pass from junior quarterback Anthony Napolitano to senior receiver Izaiah Murphy who was open for a 46-yard touchdown which made it 14-0 with 4:37 to play in the first.

After Fenwick cut the lead to 14-7, Napolitano hit Murphy from 69-yards out to set up a three-yard touchdown run by sophomore running back Jordan Anderson, who finished the day with 16 carries for 141 yards and three scores.

Anderson, who has been getting comparisons to JCA graduate and former Michigan and USC running back Ty Isaac, said Isaac has been helping him become a better overall player in his young Hilltopper career to this point.

"Ty helps a lot fixing me on how I perform on the football field," Williams said. "Maintenance, how I run and everything else, he's a huge help."

Sophomore quarterback Aiden Voss got in the action, as his first scoring pass went 40 yards to junior running back Ja'Aire Mack and made the score 28-7.

Voss and the Hiltoppers didn't stop there either; when his second touchdown pass for 15-yards went to junior receiver John Ehrsam to make it 42-7 with 30 seconds left in the first half.

"Our defense was able to go out there and establish that physical presence up front," Jaworski said. "They set the tone for the rest of the game."

In the second half, all Fenwick would get is one touchdown, and the Hiltoppers added a rushing score to finish off the game from senior running back Kenyetta Williams, who contributed to the ground game with 12 carries and 91 yards.