Resident to participate in Heart Walk after personal scare 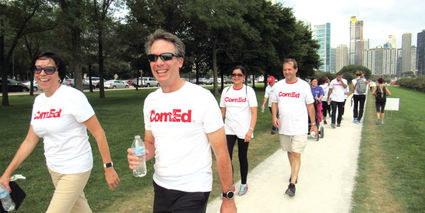 Scott Vogt will take place in his fourth Heart Walk.

Later this month, more than over 500 ComEd employees will participate in the American Heart Association's annual Heart Walks taking place in Chicago, Oak Brook and Northfield.

For local Lisle resident Scott Vogt, this walk means more to him than he can describe.

"This is my fourth walk and it's important to me to for personal reasons," Vogt said. "In 2015 my own health issues with my heart when I thought I was pretty healthy overall."

During an annual check-up in 2015, Vogt mentioned a concerning chest pain to his doctor that became a nagging issue.

While not expecting the worse news possible, the doctor ordered a stress test, which led to an angiogram.

"It felt pretty minor which is why I was so surprised," Vogt said. "It was frequent enough though it bugged me to ask my doctor and then the results came back in."

While saying his cholesterol and blood pressure were not indicative of the heart use, Vogt said the minor nagging had to be addressed.

"It was in the widow maker which is in that left artery," Vogt said. "The doctor basically said to me at some point I was going to have a heart attack and they prevented it from happening."

A second stent was also inserted into his right coronary artery a few months later in the spring of 2016.

The experience, while frightening, led Vogt to make significant changes to his diet and lifestyle-he lost more than 50 pounds and now sees his cardiologist regularly to undergo yearly stress tests.

"It's pretty impactful when you hear the words the rest of your life which is the medication I have to be on because of this," Vogt said

Part of the diet Vogt has now inserted into his daily life is not eating red meat, fried foods or any cheese.

"I honestly thought to myself that I didn't know what to do because that was my entire diet," Vogt said. "I literally joke with folks I went cold turkey because all I eat now is turkey, chicken and fish."

Since his procedure's, Vogt has led ComEd's "Pumpin Blood" team at the Oak Brook walk for the past three years and is excited to continue the tradition with his colleagues during the weekend of September 21.

In total, ComEd's 500-plus walkers across the three Chicagoland Heart Walks have raised more than $93,000 so far in support of the American Heart Association.

"It is a walk so there's not really training for it but I definitely love doing it," Vogt said. "If I can inspire someone else from my story that makes me feel good, and I'm just very thankful for all of the doctors for saving my life while changing my lifestyle in the process."