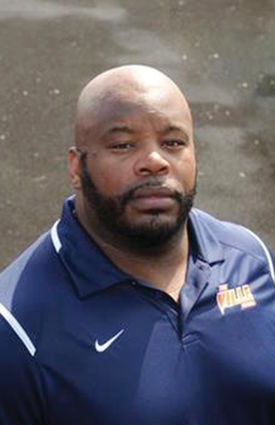 This season, Romeoville has been without its head coach and its offense.

All this has happened without head coach Oliver Gibson, who has not coached a game this season.

"Oliver is on medical leave with the district, (his foot) has been in a cast," said Romeoville Athletics Director Mike Strode. "That leave carries over to his coaching, so until further notice, he is on FMLA."

In four seasons as head coach at Romeoville, the Spartans are 6-30 and are coming off a winless season last year.

Also absent from this season's team is Gibson's son, Zack.

Listed as a junior on last season's roster, he announced on Twitter on July 29 his verbal commitment to play basketball and football at Southern Illinois University.

He is now listed as a tight end on the football roster at Midwestern Preparatory Sports Academy in Orland Hills.

The Academy is an independent, sports academy offering preparatory curriculum and athletic training in basketball and football.

It allows high school seniors that may be ineligible, home schooled or choose not to play on their high school's team a place to compete.

At press time, it is unknown if Zach is still a student at Romeoville.

As for this season, assistant coach Justin Trovato has taken over the team in coach Gibson's absence - for how long, he isn't sure.

"Coach Gibson is on leave and we are not sure if he will be back," Trovato said.

Until he hears different, he will captain the Spartans. This week's battle is with West Aurora, a new team to the Southwest Prairie Conference.

"We have a lot of guys that don't have a lot of experience and they are learning against tough opponents," Trovato said. "Our kids compete play in and play out, we just have too many breakdowns all at once.

"We keep getting ourselves in a bad position. Our offense has struggled to get first downs early in the game and defensively we have to stop people. You have to be able to run the football and stop the run and we haven't done either of those things in the first half of our games and that has put us in a tough spot."