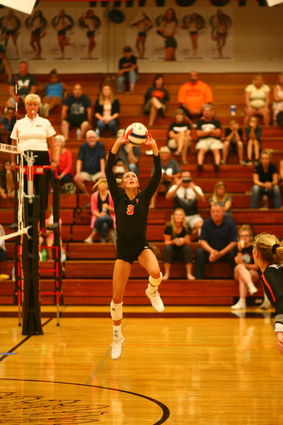 Zoey Seput and Minooka are off to a hot start this season.

With a half-dozen players back from last season's team, it is surprising the Minooka girls volleyball team was overlooked when the preseason rankings came out. That is because despite a 25-win season, a 25-16, 25-23 loss to Benet Academy in the Oswego East Regional final had those same sceptics calling the 2018 season unsuccessful.

"Last year we were 25-12 and have six players returning and people said we didn't have a good season, but we did, we just had to play Benet," said Minooka coach Carrie Prosek.

This season, those same Indians are out to quiet the detractors and have done just that opening the year winning eight of their first nine games.

"I am really proud of these girls," Prosek said. "They work hard and our defense and serve receive is the best we have had here in years. That was our focus last year and this year it shows.

"We might not have the biggest hitters around, but we have a lot of hitters that can hit from different places and we have options and that helps us because there is creativity on the court."

If creativity is what Minooka is using, the top artist in the bunch is senior Zoey Seput.

The 5-foot, 8-inch setter is a three-year starter and is painting a nearly perfect picture thus far.

"Her sophomore year she set all tall girls and this year we go from 5-7 to 6-3," Prosek said. "She has proved she can set anyone no matter their size or how high they jump. As a setter you have to be able to adjust and she does a good job of that."

Seput, like her teammates, is looking to prove doubters wrong.

"We were underestimated, but if we live up to the expectations that we put on ourselves, we can be unstoppable sometime," she said. "I kind of like it because we can prove people wrong and I think we do that every game."

All Seput is focused on this year is winning with Minooka as she has already decided on her college – committing to play at University of California-Riverside.

"It is nice knowing where I am going and having a plan and now I can just focus on my team and getting better every game," she said.

With a focus on winning, the Indians are looking to make another deep run in the IHSA state playoffs. If they would face Benet Academy again this season, it would not be until the supersectional in a match that would determine who advances to the final four.

"They have one goal in mind and that is to prove everyone wrong," Prosek said.