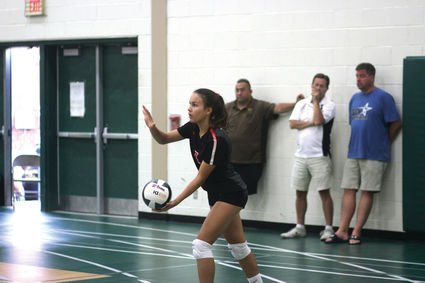 Bolingbrook is looking to build on a 24-win season a year ago.

Replacing a superstar in sports is never easy.

Especially when it is Natalie Mitchem.

Mitchem, who is now playing D-I college volleyball at Ball State University, led Bolingbrook last year to a school best 24 wins, was named the team's Most Valuable Player as a senior and finished her career with a school record 801 career kills.

"Well it's never easy replacing someone like Natalie who was obviously great," said Bolingbrook coach Moly DeSerf. "It's going to be an all in team effort this year, even more than last year if we want to continue the success we had."

With a 24-10 overall record from a year ago that ended after a win against Joliet Central in the playoffs, DeSerf said that with a tougher schedule in 2019, the Raiders will have to even play at a higher level to make a playoff run.

"I thought last year we played knowing that we were chasing a school record," DeSerf said. "This year our mentality has shifted because we beefed up our schedule to see the caliber of the teams we will when we hopefully make a run in the post-season."

So far, the Raiders have posted a 4-4 record, with not winning more than one match in a row.

The Raiders will end their regular season with a tournament in the Fall Harvest Festival at Plainfield Central, followed by an away match against Lockport.

One positive DeSerf said why she feels confident in her team, is returning almost all key starters from last year's team that will play an even bigger role this year with the loss of Mitchem.

"We returned almost everyone from last year and the girls know they all have to step up," DeSerf said.

"Lauren is a great player for us who we're looking for to be dominant as the season goes on," DeSerf said. "Taylor, Kaylee and Sara are also all phenomenal volleyball players who provide that senior leadership and we will utilize them and their strengths as well this season."