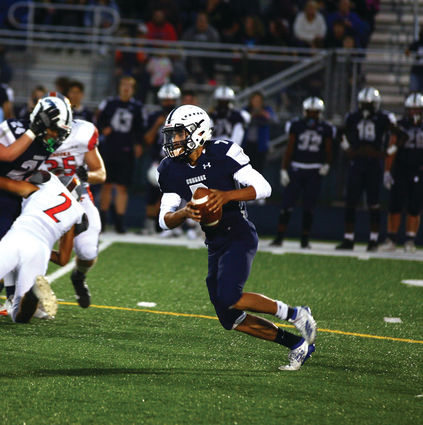 Plainfield South fell to Minooka in the annual battle for Ridge Road.

On a cool, Friday September night, the Minooka and host Plainfield South met for the 18th edition of the annual "Battle for the Ridge" Rivalry.

Separated by just 10 miles of Ridge Road, the Indians and Cougars met before a full house In Joliet'.

The Cougars entered the rivalry game having won the last two games and five of the last six against Minooka.

The Cougars held an 11-6 lead in the neighborhood rivalry, which began in 2002. Plainfield South victories in 2017 and 2018, gave their third-yard, head coach, Bill Bicker, an undefeated record against the rival Indians.

Minooka (2-0), who entered the contest ranked No.8 in the Associated Press' Class 8A State Football Rankings this week, immediately showed the huge crowd, why they were ranked so high.

The Indians, led by senior quarterback Seth Lehr, took the opening kickoff and marched 80 yards in just six plays to grab a 7-0 lead in just one minute and 39 seconds.

The TD was on a 23-yard scoring strike from Lehr to senior wideout Trent Hudak (two catches, 40 yards, TD).

After a three and out South, it just took Lehr and the Indians, just two plays to go 60 yards for a 14-0 lead.

The Indians scored three touchdowns in the second quarter for a 34-0 lead at the half, as Lehr threw for 219 of his 244 passing yards and the Lehr-to-Ellens passing combination. connected six times for 124 yards and the touchdown. With 8:39 remaining in the third quarter, Ellens would rumble in from 12 yards out, to give the Indians a 40-0 lead and initiating the 40-point running clock.

Indian fullback Jack Wingerter scored from three yards out on the first play of the fourth quarter and the Indians rolled to the 46-6 win.

"We came out from the very beginning and everyone contributed to our victory tonight," Lehr said. "I had a big night statistically but I want to thank my great offensive line for giving me time to hit my talented backs and receivers. Noah Ellens is amazing."

"Jake Shipla and our defense played great. I also am very glad, Jake is on our team, too."

"We all played well tonight and I owe all of my success, to my teammates," Ellens said. "It was a complete team victory tonight."

The rivalry win evened up the record of Indians second-year, Hall of Fame coach John Belskis, at 1-1 in the Battle for the Ridge rivalry.

"I'm kind of new at this huge rivalr, with Plainfield South," Belskis said. "Last year our defense stopped South (14-10 loss) but we were not able to get the offensive production, that we received tonight."

An understatement from the Indians coach.

The Indians rushed for 218 yards and Lehr threw for 244 for a 462 yards of offense for the state-ranked Indians.

"We played well tonight but there is always areas where we can improve," Shipla said. "

For the host Cougars (1-1) one bright spot was from their junior halfback Keith Bronson, who carried the ball 14 times for 124 yards.

Cougar junior Lorenz Nelson, scored the lone Cougar touchdown from two yards out with seven minutes left in the contest.

"We don't have any D-I players unlike nationally-ranked IMG Academy (FL) but then again who does?" Belkis said. "We have a number of good football players who play hard as a team. Seth and Noah were on the same page from the opening drive. I sure am glad that my kids don't have to block Jake Shipla. We sure are glad Jake is on our team."