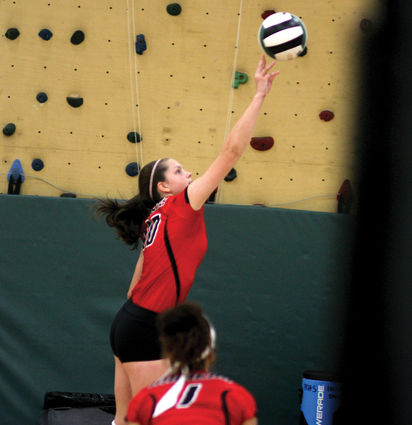 Maine South looks to use its height to its advantage this season.

With a 22-12 overall record in the 2018 season, Maine South is poised for another good year.

Head coach Kathleen Durkin said she knows the seven seniors last year had a big impact on the success of the Hawks, but her 2019 squad also has some great players.

"I know we had seven seniors last year that really played well for us," Durkin said. "However, this year, we have some girls back and we have a really tall team which plays into our favor."

The height advantage the Hawks will try and utilize for the 2019 season comes at the hand of four girls being 5-feet, 11-inches or taller, with junior outside hitter Jelena Cicic at 6-feet and senior middle blocker Caroline Anderson at 6-2.

In eight games so far this season, the Hawks have posted a 5-3 record, and look forward to the last four games of the season, which includes two tournaments that will all be at home.

"We're still trying to gel as a team this year," Durkin said. "Like every year, and this year isn't any different, the goal is to win conference."

A few of the girls Durkin said that will be leading the Hawks this year are senior middle blocker Greta Miller, junior right side hitter Ana Birkett and senior outside hitter Keelin Kelly.

"Greta is a three sport athlete and a senior and captain who is just always fired up out there on the court," Durkin said. "Ana is a great hitter who I'm even expecting more out of this season than last because she's a junior and Keelin is another senior captain who actually went down state for high jump so she can really get off of the floor and we're expecting big things from her as well this year."

The Hawks feature five seniors, seven juniors and one sophomore.

The Dons (2-0) scored a touchdown with 6:19 remaining in the fourth quarter, then sealed the victory with a late interception.

It was just the Cougars' sixth loss since 2015.