East looks to get the ship going in right direction 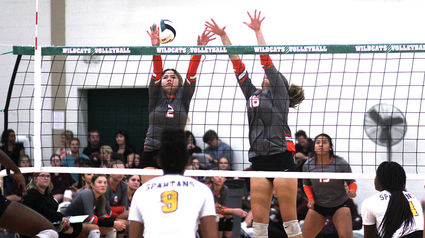 Two Bengal defenders go up for a block in tournament game.

Following a departure of head coach Alex Rodriguez; the Bengals new head coach Kurt Dolson has not had the start he anticipated.

Losses in its first six contests, while not winning a single match has called for improvement everywhere on the team.

With the Bengals not playing their first home match until September, Dolson said that not playing to others teams levels is essential for the 2019 season.

"Last year we played too much to other teams levels which really hurt us," Dolson said. "We would beat really good teams last year, but then lose to really bad ones so we want to have consistency, play our game and really start to finish games stronger this year."

One thing Dolson said that is encouraging, not that it's still a very young season, but the amount of senior's on the team and the way they lead by example.

"The way we do it here, is I pick captains for their off-court presence," Dolson said. "It's just as important as on-court and we really like what the girls have brought us from a leadership standpoint because they cheer on everyone else, make sure everybody is included and just bring everyone together."

Senior setter Yareli Pacheco, senior outside hitter Brook Fieldman and senior right side hitter Grace Knutsen are the three veteran captains of the group, and Dolson said each one of them bring a different aspect to the team, which makes the Bengals more complete.

"Yareli is our number two setter and she's really good at putting the ball where the defense is not standing at the time," Dolson said. "Brook can basically hit any shot she wants and she's just such a smart player and finally Grace really leads the team and she's probably our best blocker."

Something Dolson said that he wants his team to be remembered for not just this season, but going forward, is having fun but also being a pest to other teams.

"Supporting each other, not getting

to mentally down on ourselves and really just having fun out there is what Plainfield East is known for and what I want this team to be known for," Dolson said. "At the same time, I want to be the team that other teams hate playing, with them knowing whatever they do, they won't be able to frustrate us."

The Bengals roster consists of eight seniors, nine juniors and one sophomore.