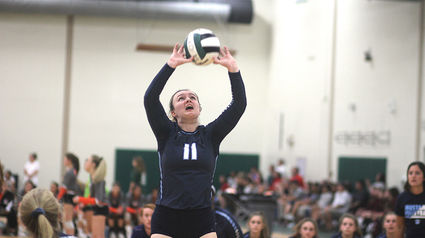 Addison Karmik is a Division-I level setter for the Mustangs this season.

"I have extremely high expectations for this group of girls," Conrad said. "I expect that we should make it to regionals, and on to sectionals, winning at least 70 percent of our games."

Consistency is something that has been a theme that Conrad preaches to her team that lacked last year, but the Mustangs will not have an easy road ahead.

With a schedule that has the Mustangs away five out of their last eight games of the season, getting off to a good start is something Conrad said is a must.

In order to be able to compete at a high level and have a better record this season, Conrad said there has been even more of an emphasis off the court in preparing for the season.

"We want to be known for being awesome people and we train very hard on our volleyball skills," Conrad said. "With that being said, there has been even more of a focus this year off the court focusing on our mental side of life and the game which we think is very important here at Downers Grove South."

The development physically and mentally from a year ago is something Conrad said is noticeable, and the captains of the team have led the way in the transition to try to become an elite program.

"We have so many great players, but at the same time we have great leaders," Conrad said. "They are obviously really important to our success and where are team will go this season."

One of the players Conrad alluded to is senior setter Addison Karmik, who will be playing Division-I college volleyball next year.

"She's a four-year starting setter that is going to away to play Division-I college volleyball and deservedly so," Conrad said. "She has greatly improved her defensive abilities in the off-season and she's been a leader for three years while she's not training other girls to be leader's once she graduates."