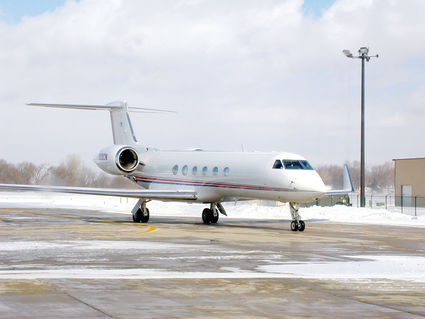 In 1989, The Joliet Regional Port District assumed ownership of the airport.

The Director of Aviation for Joliet Regional Port District, Chris Lawson, said that the Lewis University Airport is just like many other airports in the country, it is dependent on grants for renovation.

"It's a public airport that we own," Lawson said. "All public airports in the United States fight for (AIP) grants, because that's how you get runways and taxiways."

Lewis University Airport (KLOT) is one of the top five busiest airports in the state and is located near three major interstate highways in a fast-growing region.

The Airport is home to 150 aircrafts that include ten corporate jets, with annual aircraft operations of more than 100,000.

"The Airport is right behind the University and Lewis has a fantastic flight program," Lawson said. "It's definitely a very busy airport and one that we needed this grant for."

Taxiway B is the oldest pavement surface still in service at the airport.

The initial phase of its construction has dated back to 1991, when it was constructed for smaller 12,500-pound aircraft weights then using the airport.

With the growth of corporation aviation activity at KLOT, aircraft weighing 75,000 pounds now regularly uses the taxiway, which is severely distressed from heavy use and aircraft weight.

The $3.3 million federal grant completes the three-phase tear-out and reconstruction of Taxiway B, the airport's most important pavement surface supporting the airport's two corporate runways.

"This grant will widen and strengthen one of our older taxiways," Lawson said. "It's going from 35 feet wide, to 55 feet wide, so it's ageing because its 20 years old so it's definitely time for improvement."

Every year, the District goes to Springfield where the FAA and IDOT meet.

The District takes its lists of requests down to a panel, where they can each be surveyed and discussed for future evaluation.

One of the more pressing issues that Lawson said on the request sheet was the $3.3 million grant they have now received.

"This is the third part of a three part grant," Lawson said. "We had received three separate grants to do the taxiway."

Construction is expected to begin in May 2020, for completion in September 2020.

In the meantime, the airport will remain open throughout construction to serve its tenants and visitors.